To Eat and Run: What is American Food?

People who come to the United States for the first time think that fast-food defines American food. However, fast-food is only part of American food culture.

Although fast-food restaurants are common, fast-food does not make up most of what Americans usually eat. Many Americans cook food at home. Sometimes that means just heating up processed food in a microwave, but some people still cook from scratch, using multiple ingredients and whole foods. Some Americans follow the idea of the five basic food groups: protein, such as meat, legumes, and nuts; dairy (ex., milk, eggs and cheese); grains (ex., rice and wheat); fruits; and vegetables. Health professionals and the government recommend that everyone eat food from each food group every day. 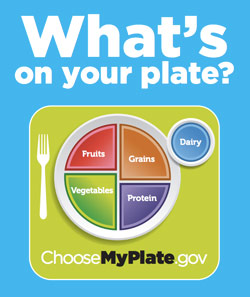 While the food in fast-food restaurants is often high in calories, cholesterol, and trans fats, fast-food restaurants are starting to offer healthier choices. For example, at McDonald’s, Wendy’s, Burger King, Subway, and Starbucks, you can get salads, fruit and yogurt, or oatmeal. Most sit-down restaurants, like Applebee’s or Denny’s, offer healthy meal options too. These are sometimes found in a special section of the menu, labeled as light, or there may be a picture of a heart next to a menu item. American restaurants also like to serve large portions of food. If Americans leave a restaurant still feeling hungry, they don’t think they got what they paid for and may not recommend the restaurant to others.

Healthy food options are available at supermarkets or grocery stores. You just have to look for them. Grocery stores have lots of fresh produce (fruits and vegetables), grains, and meats year-round. Furthermore, it is common to find special aisles for organic foods, or food that is grown without the use of toxic chemicals such as fertilizers and pesticides. Many people feel that organic food is healthier because it is more natural.

Although conventional grocery stores now sell healthier choices, there are specialty grocery stores that sell mostly organic food. Examples of these stores are Whole Foods, Sprouts, and Trader Joe’s. In addition to supermarkets and grocery stores, farmer’s markets offer a variety of healthy food choices. A farmer’s market is an area of a town or city where locally grown and produced fruits, vegetables, meat, grains, and homemade items such as jams, breads, soaps, and more are sold. Many farmer’s markets are only open on Saturday, and most only operate during late spring, summer, and early fall.

So “What is American food?” It might best be described as a collection of different kinds of food that originated from other parts of the world, but that has been adapted. As American culture is made up of a wide variety of individual, original cultures, American food is made up of a wide variety of dishes that come from those cultures. For example, restaurants featuring Mexican, Italian, and Chinese cuisine are very common in the U.S., even in small towns. It is important to understand that although these kinds of cuisines are called Mexican, Italian, Chinese, etc., the flavors, ingredients, and kinds of dishes may be quite different from what is found in Mexico, Italy, or China.

All in all, while there are a lot of fast-food restaurants in the U.S., and Americans eat a lot of fast-food, it is incorrect to think of American food as being only something that comes from McDonald’s or Pizza Hut. Just as the English language has borrowed words from many different languages and cultures, American food has borrowed from the great and wonderful flavors of the world, adapted them, and created unique dishes which can only be described as one thing: American food. StudyUSA has helped me determine what school to choose and has also opened my eyes to see the benefits of studying in the USA.