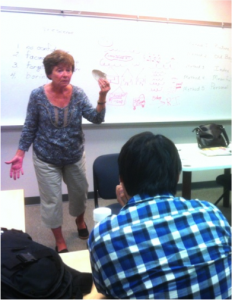 When you think of a classroom, you probably imagine a teacher or professor lecturing in a routine manner, students dutifully listening, going through the motions. You may think of something similar in the four walls of an intensive English classroom—reading, writing, listening and speaking. So when an ESL teacher at A.C.E. Language Institute at the University of Rhode Island pulls out a quohog shell from nearby Long Island Sound you may be surprised that it’s part of the her lesson plan. But don’t underestimate a shell in the hands of a good teacher; it may be all that is needed to for an in-class assignment. Focused on journalism’s five W’s …

… students in Carol Evans’ Level 5 Academic Speaking make the shell the subject of questioning: The student’s short answers turn into a coherent report, demonstrating their clear knowledge of the conversation. Examples that everyone can understand, like the shell used in Carol’s class, unite a classroom and make learning accessible to everyone—despite language differences or culture. From the east coast to the west coast of Seattle, students in another Academic Speaking class debate the local and national issue of undocumented workers. Students in the A.C.E. Language Institute at Seattle Pacific University work in three person teams to prepare a rigorous five minutes in which they will deliver their opening statements and thesis. Quickly following, they have ten minutes to formulate their rebuttals, and another ten minutes to present.

The class quiets as the students who support legalization speak to the class. They advocate for the financial benefits of five million dollars in saved deportation fees and seven million gained in tax revenue. Students of the opposing side, argue that legalization itself would be expensive. The teams manage to sway five opinions through their research, speaking and comprehension skills. The conventions of academic English, such as debate, are crucial in preparing for American university life. While some learn everyday English with shells and debate, one group of students is learning through music. At the A.C.E. Language Institute at Montana State University, instructor Paul Mart presents students in his English Through Music class with a worksheet of lyrics with several blanks. As the song plays over speakers, students pluck the missing words out of the Beatles’ “Yesterday.” Next on the rotation is “Hello Goodbye.”

As they listen to the song, students write all the antonym pairs—words with opposing meanings—on flashcards. As they continue to listen to the music, they hold up the card that matches the lyric being sung. Everyone learns differently and for some associating vocabulary with a specific musical tone aids in retention. This class learned a little bit of English thanks to the Beatles’ tunes.