Caitlin Clancy (M.) came from Australia to study physical education and play basketball in the U.S. She played two years at Northwest College in Wyoming and transfered to Cameron University in Oklahoma in summer 2015. Clancy will take a scholarship in basketball and finish her exercise science degree in Oklahoma. Photograph by Marc Lamberger

Something is missing. I got this feeling at the end of March, when the evenings on our Northwest College campus became kind of boring. The thing that’s missing is a special part of college life: the sports.

Basketball, volleyball, soccer and wrestling, every season has finished. There are no games or events that connect the people. There is no doubt where the students are when one of their teams is playing at home. Better: Where the community of a college-town is. They are supporting their team.

I studied for a year at a community college in northern Wyoming, Northwest College, where around 2,000 students are enrolled. Sports are a main part of campus life. I covered sports for our student newspaper in the NJCAA (National Junior College Athletic Association). We had the most interaction on our Facebook page during basketball and volleyball games. Thousands of people watching the videos and statuses we posted. Drive my point even further: Sports are the main public attraction of many campuses in the U.S.

Ohio State is a good example. Journalist, Laura Pappano, wrote in The New York Times that the university boasts 17 members of the American Academy of Arts and Sciences, three Nobel laureates, eight Pulitzer Prize winners, 35 Guggenheim Fellows and a MacArthur winner. But, sports rule. Ohio State is most popular for its American football program.

Many people follow athletes. Many people support them in the gym and on the field. Of course, sports are even bigger at four-year-colleges or universities, which have sports teams in the NCAA (National Collegiate Athletic Association). American Football in the Division 1 class is huge. Stadiums are full, fans wear their team’s apparel, some paint the team-colors on their faces. Most of the NCAA games you can watch on television, fans meet in pubs to celebrate and suffer together. Some fans even wait in front of arenas and stadiums to cheer for their teams as soon as they leave the bus. Another example is March Madness, the basketball championship in the NCAA Division 1. Video streams about the four best Division 1 teams are running in the web and on apps like Snapchat. 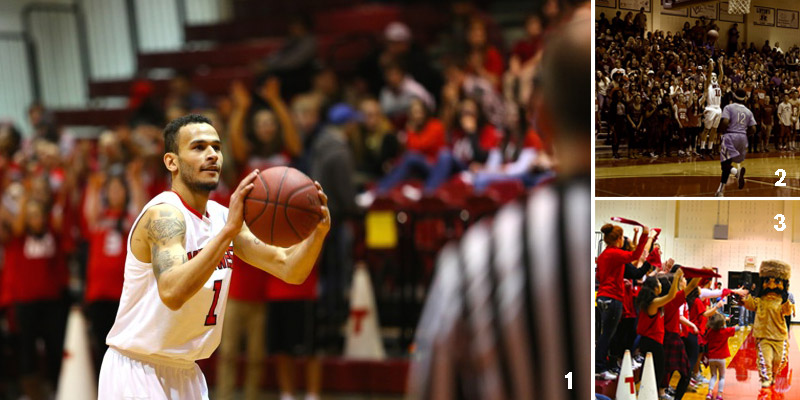 As a foreign student, it’s interesting to follow U.S. sports in college. I grew up in Germany, where sports are part of clubs -- no matter what kind of sports you do. In most European countries it’s the same system. You go to universities to study, but there are no sports competitions like the NCAA, the NAIA (National Association of Intercollegiate Athletics) or the NJCAA, which govern the college sports in the U.S.

In Europe, soccer is dominant; fans support teams like the FC Bayern Munich, Real Madrid, FC Barcelona, Manchester United, FC Liverpool, Juventus Turin or Paris St. Germain, just to name a few giants. In the U.S. fans support basketball teams like the Kentucky Wildcats, the Louisville Cardinals, the Wisconsin Badgers and the Duke Blue Devils. Every collegiate team has a mascot who encourages fans to cheer for their team. It’s similar with American football teams.

By the way: Mascots often get support by cheerleaders, what is typical for sports in high school and college. I remember when I traveled with our basketball team to the national tournament in Hutchinson, Kansas. It was the loudest when the teams of South Plains, Texas, and host Hutchinson played. Their cheerleaders danced and sang next to the court, and the mascot animated the fans to join. Cheerleaders and mascots are often the key for a great atmosphere at sporting events. But, it needs more, of course. It needs a crowd.

It’s not just students who watch games and support teams. They have a large fan base consisting of children, young and older adults. Thousands buy tickets to watch the games, many teams don’t sell their tickets just on their website. You can book them in websites like ticketmaster.com or stubhub.com, and for popular team you should be quick before all tickets are sold out.

It’s also important for them to sell items like shirts, caps or sweaters to their fans. Sports in the U.S. are commerce. Better: Sports are business. Many college coaches earn more money than presidents of universities. For many colleges, sports are even a money-losing proposition, but a well-known sports program helps colleges to get a good public image.

Success in sports makes universities, colleges and many of their students proud. They identify with their school and say: Hey, I’m a Wildcat (University of Kentucky), I’m a Red Raider (Texas Tech University) or I’m a Cardinal (University of Louisville). Our mascot at Northwest College is a Trapper. Our athletes say: “Once a Trapper, always a Trapper.” Fans and teams build the “Trappernation.” My favorite example is Sam Jones, a good friend of mine. If you search for “Sam Jones” in social networks, you better search under “Trapper Sam.” It’s great to see how students build a unity through sports.

Sports are definitely a great chance for international students to study in the USA. Most of my foreign friends have athletic scholarships in volleyball, soccer or basketball. They came from England, Ireland, Germany, Serbia, France, the Czech Republic, Brazil, Japan and Canada to combine their passion with a good education. By they way: Cheerleaders can also earn scholarships.

It’s very intense to study and playing competitive collegiate sports, but at the end you have a plan A and B. You get the opportunity to play at the next level for a couple of years, make the experience living in another country, and you will also be ready to work when you earn a degree.

One of the best examples is a good friend I made in college. His name is Christopher Boucher. He came from Montreal, Canada, to study in the USA and play basketball. In 2015, he was named Spalding NJCAA Division 1 Men’s Basketball Player of the Year. Boucher led Northwest College to a national tournament – the first time since 46 years. Next year, he will play in the Division 1 for the Oregon Ducks. His big goal is the NBA, if it shouldn’t work, he will play professional overseas. He worked hard, practiced every day and studied. He earned the price. “Before I came to the U.S., basketball was just an activity,” Boucher said. “Now it’s a job. I could do things for people, for my family and for myself with basketball.” He built the way to a big future through sports at college. Transferring from a Community College - 2 + 2 Agreements Begin Your Bachelor’s Degree at a Community College: 2 + 2 Agreements Does 2+2 Really Equal 4? Starting a Bachelor’s Degree at a Community College StudyUSA provides information about diverse US universities and US educational system. It also gives handy tips for international students, which help me a lot!