Initials and Acronyms in Slang: O-M-G! Everyone in America speaks in code!

What you're about to read IS English! It may not look like English or even sound like English. That's because they aren't actually words. They're initials and acronyms used by absolutely everyone, young and old. In fact, we use them so often, we don't even realize they're NOT words! Some initials are used in speaking, and others are only used in texting. FYI ("for your information") this list is only the beginning!

(excerpts from The Slangman Guide to STREET SPEAK 2)

In context:
My BFF had to call Triple A on the way to her CPA because she blew a tire on I 5!

Translation:
My Best Friend Forever had to call the Automobile Club of California on the way to her Certified Public Accountant because she blew a tire on Interstate 5!

In context:
BTW, this is going to make U start ROTFL, and I know this is probably TMI, but our teacher's pants fell down in class 2day and I'm not J/K!

Translation:
By The Way, this is going to make You start Rolling On The Floor Laughing, and I know this is probably Too Much Information, but our teacher's pants fell down in class today and I'm not Just Kidding! 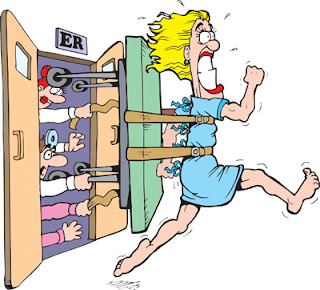 In context:
OMG! At 9AM, Carol collapsed on the floor because she OD'd! So the RN performed CPR on her. Then the MD hooked her up to an IV and got her to the ER just in time!

In Slangman's "Real Speak":
Oh, my God! At 9 o'clock in the morning ("Ante Meridiem" meaning "before midday"), Carol collapsed on the floor because she Overdosed! So the Registered Nurse performed Cardiopulmonary Resuscitation on her. Then the Medical Doctor hooked her up to an Intravenous fluid drip and got her to the Emergency Room just in time!

In context:
The CEO wants you to FedEx these CDs to the VP ASAP OK?

In Slangman's "Real Speak":
The Chief Executive Officer wants you to send via Federal Express these Compact Discs to the Vice President As Soon As Possible OK?

In context:
Today on ESPN one of the players of the NBA got DQ'd for punching another player! It was a total KO! He's going to need some serious R&R after that!

In Slangman's "Real Speak":
Today on the Entertainment and Sports Programming Network one of the players of the National Basketball Association got Disqualified for punching another player! It was a total Knock Out! He's going to need a lot of Rest and Relaxation after that!

To learn more American slang & idioms, visit us at slangman.com. Use Coupon Code: STUDYUSA for a 20% discount on all products during checkout! 5 Trends of Online College Education in 2016