Thankfulness. Celebrating Thanksgiving in the USA. 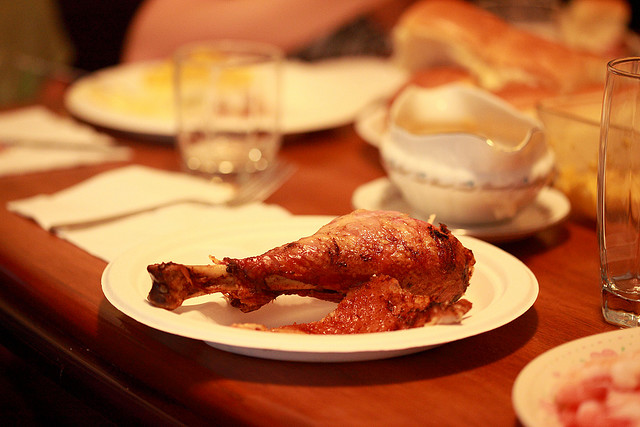 [caption id="attachment_357" align="aligncenter" width="640" caption="by Sharon Pruitt"][/caption] It's Thanksgiving and cooks, both good and bad, are prepping their turkeys, baking pies, stirring cranberries, all in preparation for today's feast. Thanksgiving is a beloved holiday in the United States and if someone, say an international student, was to ask me what Thanksgiving was all about, I would have two explanations: one modern and one historical. Today, Thanksgiving is centered around a large feast, specifically a turkey. Accompanying the bird are many other traditional dishes, such as cranberries, stuffing, mashed potatoes, and of course pumpkin pie. Inspired by the Fall harvest, people decorate with pumpkins, corn, and red and gold leaves. It isn't all about the feast and complete gluttony, although we do sufficiently stuff ourselves. Thanksgiving is about just that, being thankful. Whether it be for the people in your life, or material things, or opportunities, it is a time to look at your life and recognize what you're thankful for. [caption id="attachment_358" align="aligncenter" width="640" caption="by J Aaron Farr"]

[/caption] Historically, Thanksgiving is derived from a feast shared by American pilgrims and Native Americans. As the story goes, Native Americans shared their harvest bounty with colonial Pilgrims who were on the verge of starvation. Like many other holiday stories, its accuracy is up for debate. (You can read more about the facts here). No matter where you are, you too can think about thankful for. Happy Thanksgiving!