From Student Blogger, Nelofar: Life as a Senior in High School

Four years ago, I was in the same boat that I am in today. Although I was a high schooler back then and now I am a university student, I was a senior nonetheless. Obviously, a lot has changed since my senior year of high school, but it almost feels like nothing might have changed, after all. Let me elaborate on that more.

As a senior in high school, I was obsessed with the idea of getting into a college no matter what. I was conflicted in what I wanted to study–it was either going to be economics, English or may be history. You know, as a high schooler, I never really gave much thought to what I wanted to pursue as a career. I thought whatever major I chose, I would find a job in that field and be set for life. For me, it was about what interested me the most, so when considering different colleges and universities, I would only focus on one major at a time.

Initially, I had the high hopes of getting into a college that would grant me a full-ride scholarship for being smart! Ha ha! Oh, how wrong and naive I was! Many schools want SAT/ACT scores, they want TOEFL or IELTS scores from International students, no matter how good the students’ English is. In short, you have to have some sort of standardized test scores that attest to your intelligence. Plus, RARELY ever do international students get a full-ride to anywhere (unless it is through an organization, a foundation or a government program). I was just blissfully ignorant on that back then.

I thought my GPA would reserve me a spot in any college or university I applied to. I never once doubted myself in terms of not being able to go to college because I wasn’t smart enough (all thanks to my high school teachers and mentors), plus I had a very unique background. I was active in two or three extracurriculars, but nothing really made me stand out from the others doing the same thing. In other words, I was just your average high schooler with a good GPA and a story to tell. That’s it.

As my college and university search rolled into the spring semester of my senior year, the harsh reality of everything fell upon me. It was the month of March. I had filled out over 15 applications, had taken the SATs three times already, had sent out my SAT scores to all of those schools, had spent hours modifying my personal statement and had yet to get an acceptance from a college or university with a good scholarship that would allow me to attend the school. To say that it was one of the most stressful times of my life is not an exaggeration. I was now able to fully understand how complicated and out-of-my-hand this whole process was.

In the middle of March, I got my rejection letter from my top choice college. I pinned it to my cork board as a reminder. Then, I got put on two waitlists from two of my other second choice colleges. Basically, it was rejection after rejection. Every time I would get an envelope from a school, I knew what it meant—another waitlist or rejection. You can probably tell how disappointed and heartbroken high schooler Nelo was. I had almost lost hope and was about to call my college search quits when my host mom saw me and came to my rescue! Upon her insistence, I visited Dakota State University (DSU) during my spring break and by this time, I knew I wanted to study English, so I met with my now adviser, Dr. Sewell. Dr. Sewell was so welcoming and ready to help me fit into DSU that I instantly knew where I belonged. Within a month, I applied to DSU, got a good scholarship based on my SAT scores and made the decision of making DSU home for the next four years of my life. 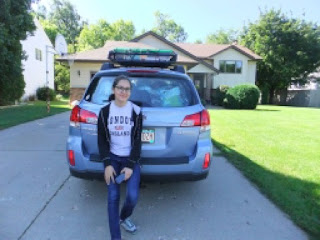 And here we are four years later… My time at DSU has been one of the greatest learning experiences of my life so far. I have studied, worked hard, had fun and made so many memories here. If I had to write about it, it would be the size of a book. So, I will spare you from reading that for now.

Four years later, I am trying to find a new home for the next three years of my life. It is so bittersweet, so overwhelming, so exciting and so nerve wracking, all at the same time. Can you imagine turning your life around every four years? Starting all over every four years? It’s a blessing and a curse at the same time. As soon as one gets comfortable with one’s surroundings, it’s time to leave again. 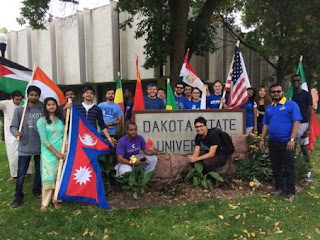 One thing that I don’t think I will ever forget is how DSU embraced me and made it easy for me to continue my education when no other colleges would give me a chance. And that, my friend, is why DSU will always have a piece of my heart no matter where I end up in the next four or ten years. So, my advice to you is choose a place that wants you, not a place that wants your money (that as students most of us don’t have).

Nelofar Sultan from Pakistan is a senior studying English for New Media at Dakota State University in Madison, South Dakota. 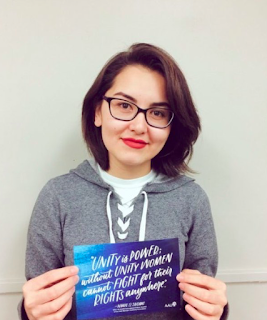