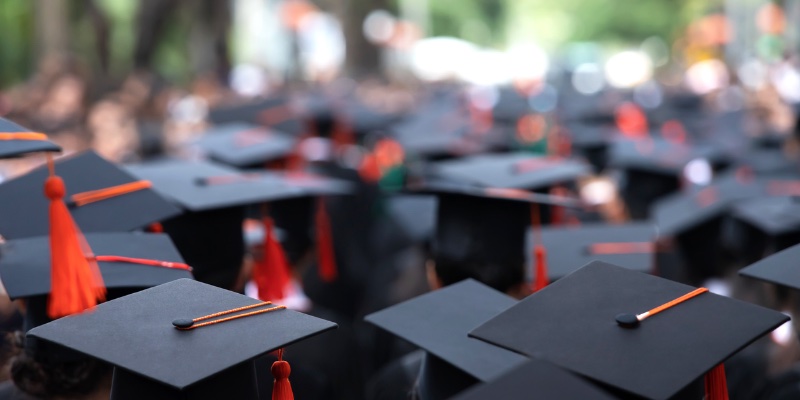 Spring brings college graduation season in the U.S., which means commencement speeches are being delivered by celebrities, politicians, and business leaders at schools across the country. The best addresses are timeless, offering words of wisdom and guidance that students can benefit from now and also call forth at various stages in life.

As this year’s graduates get ready to make their marks on the world, here’s a look at some of the best advice offered at college commencement ceremonies over the past 15 years.

“There’s no difference between anyone who is discriminated against, whether it’s the Muslims or the Jews or minorities on the border states or the LGBT community. It is all one big ‘hate.’ To me, the only answer to more hate is more humanity. We have to replace fear with curiosity. …

“We’ll find the ‘we’ by connecting with each other and by believing that we’re members of the same tribe, and by feeling empathy for every soul. …

“Today, you start down the path of becoming the generation on which the next generation stands. I’ve imagined many possible futures in my films, but you will determine the actual future, and I hope that it’s filled with justice and peace. I hope you outrun the T. rex, catch the criminal and, for your parents’ sake, maybe every now and then — just like E.T. — go home.”

“I now realize that the most valuable thing I picked up in college and graduate school was not a specific set of facts or a piece of knowledge but rather how to acquire knowledge.

“I learned how to read an essay closely, find new sources, search for data so as to prove or disprove a hypothesis, and figure out whether an author was trustworthy. …. And most of all, I learned that learning was a pleasure, a great adventure of exploration.

“Whatever job you take, I guarantee that the specific stuff you have learned at college —whatever it is — will prove mostly irrelevant or quickly irrelevant. Even if you learned to code but did it a few years ago, before the world of apps, you would have to learn anew.

“And given the pace of change that is transforming industries and professions these days, you will need that skill of learning and retooling all the time.”

“Failure is just life trying to move us in another direction. … Learn from every mistake because every experience, encounter and, particularly, your mistakes are there to teach you and force you into being more who you are.

“And then figure out what is the next right move. And the key to life is to develop an internal moral, emotional G.P.S. that can tell you which way to go.”

“If you haven’t found it yet, keep looking. Don’t settle. As with all matters of the heart, you’ll know when you find it.

“… Don’t let the noise of others’ opinions drown out your own inner voice. And most important, have the courage to follow your heart and intuition.”

“Some failure in life is inevitable. It is impossible to live without failing at something, unless you live so cautiously that you might as well not have lived at all — in which case, you fail by default.

“You will never truly know yourself, or the strength of your relationships, until both have been tested by adversity. Such knowledge is a true gift, for all that it is painfully won, and it has been worth more than any qualification I ever earned.”

“There’s no community service requirement in the real world; no one forcing you to care. You can take your diploma … and chase only after the big house and the nice suits and all the other things that our money culture says you should buy. …

“It’s because you have an obligation to yourself. Because our individual salvation depends on collective salvation. Because thinking only about yourself, fulfilling your immediate wants and needs, betrays a poverty of ambition. Because it’s only when you hitch your wagon to something larger than yourself that you realize your true potential.”

“I got the idea to start Amazon 16 years ago. … I was working at a financial firm in New York City with a bunch of very smart people, and I had a brilliant boss that I much admired. I went to my boss and told him I wanted to start a company selling books on the Internet. He took me on a long walk in Central Park, listened carefully to me, and finally said, ‘That sounds like a really good idea, but it would be an even better idea for someone who didn’t already have a good job.’

“That logic made some sense to me, and he convinced me to think about it for 48 hours. … Ultimately, I decided I had to give it a shot. I didn’t think I’d regret trying and failing. And I suspected I would always be haunted by a decision to not try at all. After much consideration, I took the less safe path to follow my passion, and I’m proud of that choice.

“Tomorrow, in a very real sense, your life — the life you author from scratch on your own — begins. How will you use your gifts? What choices will you make?

Will inertia be your guide, or will you follow your passions?

Will you follow dogma, or will you be original?

Will you choose a life of ease, or a life of service and adventure?

Will you wilt under criticism, or will you follow your convictions?”