Taking a selfie from the Brooklyn Bridge

If you are interested in studying in the United States, take a deeper look into one of the country’s most exciting and diverse cities: New York City.

New York City has many nicknames, one of them being the “Big Apple.” The origin of this nickname is often disputed, but many believe it originated in the 1920s from John J. Fitz Gerald, a sports writer for the New York Morning Telegraph.

Located in the southeastern region of the state of New York, the city is known for many of its landmarks, including Carnegie Hall, the Empire State Building, Broadway and the Statue of Liberty. These were all popular attractions for the 56 million tourists that visited the city in 2014, generating approximately $61 billion dollars in revenue.

New York City is also one of the most diverse cities in the entire nation. Generations of immigrants from all over the world have made New York City their home over the past few centuries.

Chinatown and Little Italy are two of the numerous ethnic neighborhoods in the city that contain restaurants, shopping centers and other cultural offerings for anyone that would like to experience their particular culture.

New York City is also known for being the home to some of the world’s most successful sports franchises. The city has a total of eleven sports teams in the five major professional sports leagues in the United States, winning a collective 53 league championships. Twenty-seven of those championships belong to baseball powerhouse, the New York Yankees. The only two sports teams to never win a championship in New York City are the New York Red Bulls and New York City FC, which was recently founded in 2013. These two soccer teams have greatly contributed to the growing popularity of soccer in the United States.

New York City is also the center for global business and commerce activity. It contains some of the world’s most successful finance, retail, world trade, real estate and media organizations, as well as the two largest stock exchanges: the New York Stock Exchange and NASDAQ. With so many business opportunities in the city, many entrepreneurs and young professionals use the city and its resources as a starting point for their careers.

“The City That Never Sleeps”

In addition to being called the “Big Apple,” New York City is known as being “The City That Never Sleeps.” Similar to Los Angeles, California, New York City is full of action-packed entertainment attractions. Madison Square Garden, Radio City Music Hall and Central Park are three venues within city limits that are constantly hosting concerts and other live shows, attracting millions of attendees. New York City also features the Broadway Theater District for those interested in live theater. Broadway sold a record $1.36 billion worth of theater tickets in 2014. 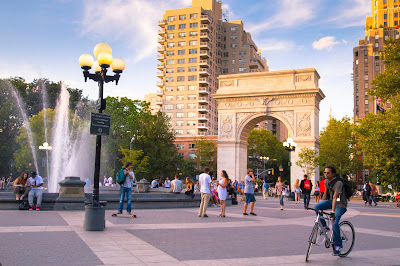 New York City is known around the world for its educational facilities, bringing in more non-local students than any other city in the country. Approximately 594,000 students are studying at the more than 100 universities and colleges in the city. A few of the most prestigious universities include Columbia University, New York University, St. John’s University and the New York Institute of Technology. The city also offers an abundance of smaller universities and colleges for students looking for different educational settings.

Students can find endless housing opportunities in the city. Not every student chooses to live on campus, especially in a city as large as New York. If you choose to live in an off-campus apartment, you’ll need to find reliable furniture that is also affordable. Furniture rental is an economical and hassle-free way to furnish your home. CORT, the leading provider of furniture rental in the U.S., furnishes thousands of student apartments with furniture and accessories, with rental packages starting as low as $99 per month.

With a city that is so large and full of life, it can be hard to process all of its offerings. If you are interested in learning more about the “Big Apple,” take some time to research this incredible city. For more information on CORT’s furniture rental solutions, please visit CORT.com. Mai Ngoc Phuong Nguyen from Vietnam: Studying for an Associate of Arts Degree in International Studies at Shoreline Community College Study in the USA helped me a lot on this journey providing lots of useful information like how to get my student visa, what schools to apply to, and much more.