My Summer Road Trip Adventure Around the U.S.

When I first arrived in the U.S., in January 2020, the last thing I had expected to happen was to spend more than a year in my room!

I was ready to learn a new language and to fully make my dive into the American culture. However, the pandemic hit in February, and in March our lives with all our activities moved online.

I had online classes for more than a year and half, and that means that I couldn’t meet any new friends in person.

When an international student arrives in a new country, meeting new people and making friendships is fundamental for the process of inclusion in the new environment.

That’s why I was eager to get my vaccine as soon as possible. I received my full vaccination in May 2021. And in June, I did something that I was going to do in pre-COVID time, a trip on the road of the U.S.

Before speaking of the trip, you need to know that I belong to a missionary Catholic community, and we have three houses in the U.S.: Boston, New Jersey, and Wisconsin.

A fellow missionary, Diego, who was living in Wisconsin, had two weeks off from school in June. Therefore, I asked him if was willing to live this adventure together. 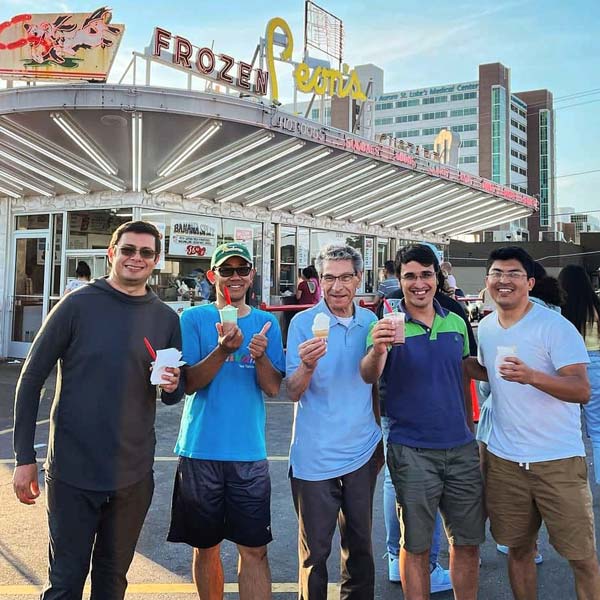 When Diego arrived in Boston, at the beginning of June, I gave him a tour of the city. First, we visited downtown Boston, Copley Square with the Trinity Church, the Public Garden with its gorgeous bucolic environment in the middle of the city, the Boston Common, and the view of the city from the Harbor.

We also had a unique experience going whale watching from Gloucester, North Massachusetts, sailing for four hours in the Boston Harbor looking for these gigantic creatures. That was my first time to see a whale in a wild environment and not in captivity. I had seen them in aquariums before, but that’s not the same when you can see them living free in the vastness of the ocean.

After a brief visit around other places in Massachusetts, we started our long trip. 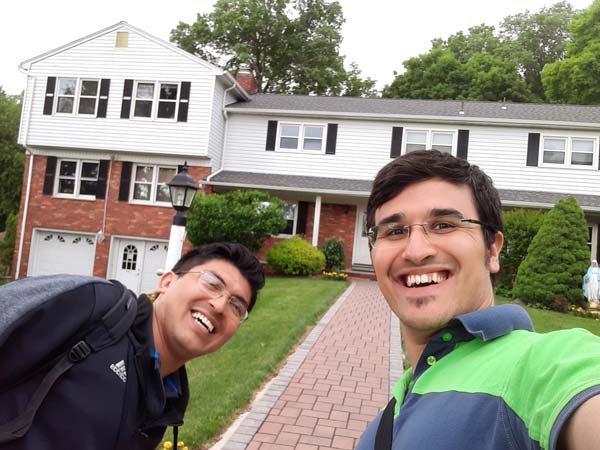 Diego and Pietro arriving in Wayne, New Jersey – first stop of the trip

The first stop was in Hartford, Connecticut, to see the beautiful and original Capitol that reminds me of Northern European castles. Then, we drove to our missionary house in New Jersey where other fellow missionaries were waiting for us.

New Jersey is called “The Garden State.” And that’s pretty easy to understand why that's so — small towns surrounded by trees and wildlife are everywhere. For example, every morning some deer came to visit us while we were having breakfast at the backdoor of our house.

From Wayne, New Jersey, we visited “The City that Never Sleeps,” New York City, and in particular Manhattan. New York is just amazing with its skyscrapers, tall buildings reaching the sky. At every corner, there is something to see. I had seen many places in New York only in the movies, like the Brooklyn Bridge, the Twin Towers Memorial, and the Statue of Liberty. 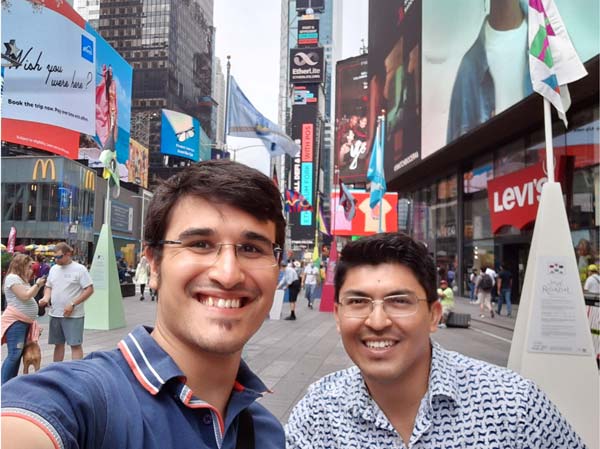 Diego and Pietro at Times Square in NYC

However, what I loved the most in New York is Central Park. Miles and miles of green, paths, lakes, and fields of every kind in the middle of the city. People there play every kind of sport, canoe in the lakes, play music, dance, have a picnic, celebrate birthdays, and many other activities as a sign of a city that is alive.

After watching New York City by night from the Hudson River, Diego and I drove down to Philadelphia, “The City of Brotherly Love.”

Philadelphia is a city rich in history. There the first national Congress took place, and the U.S. proclaimed its independence from the Kingdom of Great Britain.

We visited the Liberty Bell, which is one of the national symbols like the Statue of Liberty. The Liberty Bell is a sign of freedom and inspiration for many people around the world. 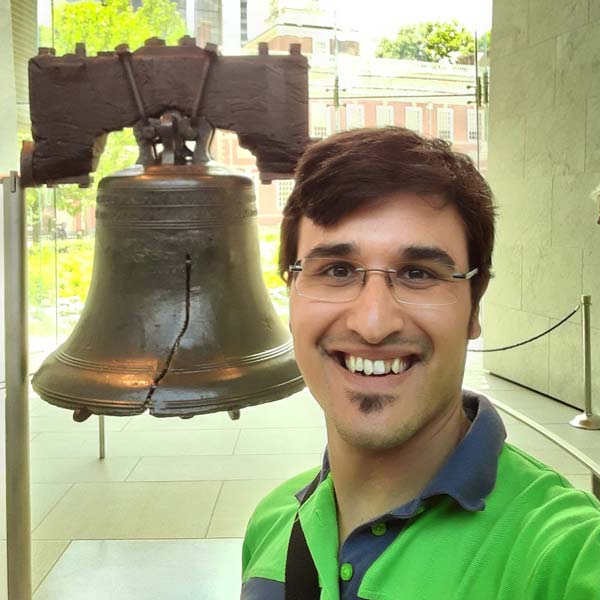 With the Liberty Bell in Philadelphia

From Philadelphia, we drove across the state of Maryland and we spent the night in a cute small village called Havre de Grace. We chose that location because that’s halfway between Philly and Washington D.C., our next stop.

In Washington, we walked all the way from Capitol Hill to the Lincoln Memorial. And of course, we couldn’t miss the White House! Washington is very different from other cities around the country. No tall buildings, but huge Greek-style architecture everywhere. I think that is a city that tries to show the grandeur of the U.S. and the idea of being a great nation.

We didn’t have so much time to visit the numerous free museums in Washington because we had to drive for about six hours to reach our house back in New Jersey. 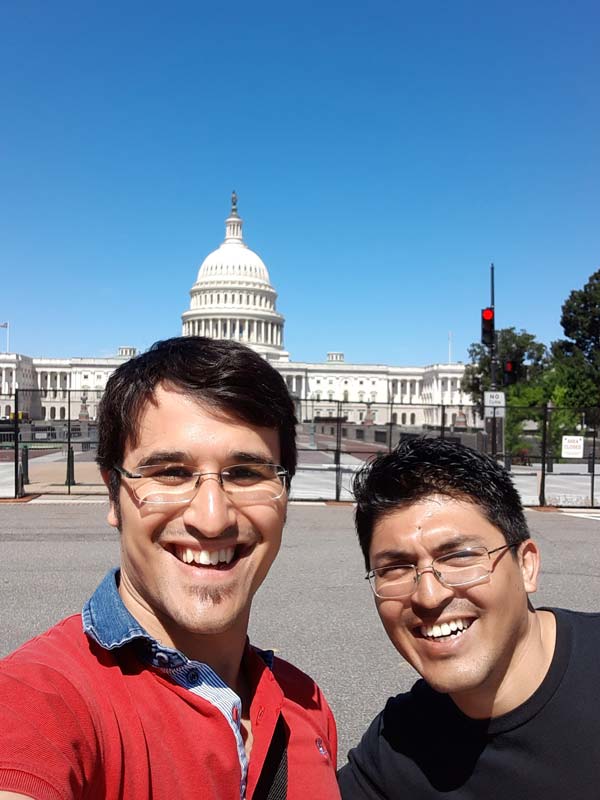 Back in Wayne, we rested for a day. The following day, we drove all the way up to the border with Canada, in the state of New York, to visit one of the wonders of the world, Niagara Falls. I had never seen something like that, the unstoppable power of nature, all this amount of water that flows uninterruptedly every day. 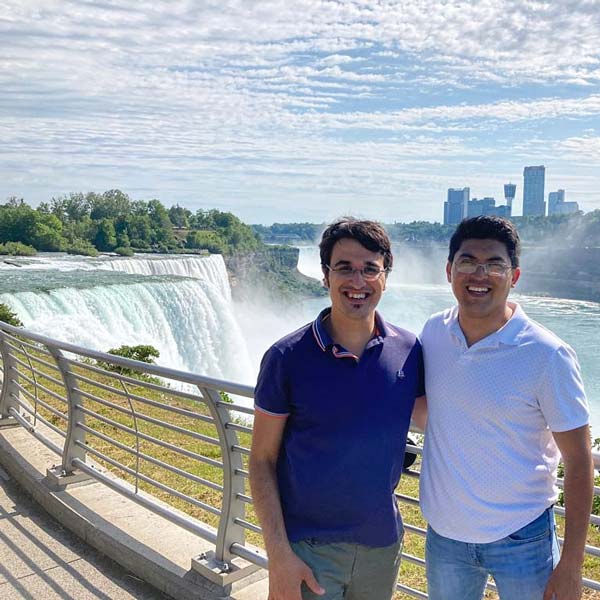 After being amazed by such a power, we drove through the vast fields and farms of Ohio state. In Ohio we spent the night in a hotel close to Cleveland.

The next day we got in the middle of a storm, so instead of visiting Chicago as planned, we went right to Wisconsin, the community where Diego was coming from. Wisconsin is called “America's Dairyland.” In fact, there is a huge production of milk, cheese, and any kind of dairy product. There we visited Milwaukee, which is the capital located right on Michigan lake.

While my friend went back to school, I knew some other friends in Chicago, so I contacted them wondering if we could grab a coffee together. Instead, they invited me to stay overnight at their place and show me the city the next day.

They live in the middle of downtown Chicago on the 20th floor of a 30-storey building. For me was my first time staying in a skyscraper. 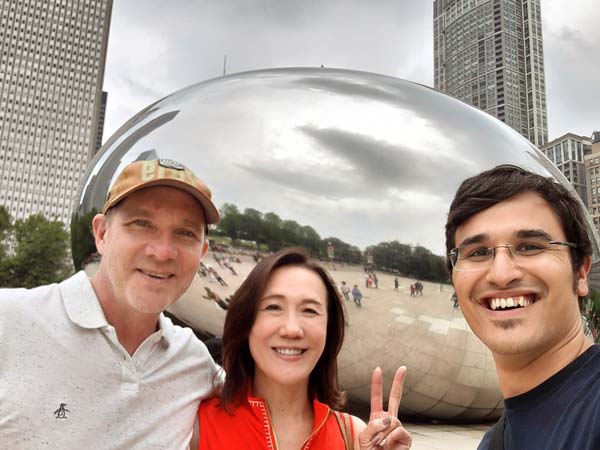 Pietro and his friends in Chicago

Chicago is alive like New York City, with many activities everywhere. Pubs, restaurants, live music, and events are part of the life of the city. I loved Chicago’s Riverway, where people can walk through the city alongside the river until reaching Lake Michigan. And, of course, I couldn’t miss visiting the famous Chicago Hard Rock Cafè to see Jimmy Hendrix’s guitar displayed there.

Chicago was the last city I had visited along the road. After that, I took my car, driving with another fellow missionary, Wawan from Indonesia, back to Boston. Visiting Boston with Anna and Wawan

This trip on the road has been for me the best way to restart after this pandemic. This journey gave me hope that we can “go back to a new normal,” as we heard in the mantra that accompanied us during this challenging time.

Finally, after a year spent in my room, I could visit a great part of the U.S. and find out the full variety of landscapes, food, architecture and culture that’s present in this country. I hope next year to have a chance to travel to the West Coast as well.

Pietro Rossini is a Xaverian Missionary and an ESL student at Framingham State University. He will be attending Boston University this fall where he will be studying for a masters in journalism. His dream is to collect and share stories of humanity around the globe, making the world a single family. My Summer Road Trip Adventure Around the U.S.