I’ve been away on a month long road trip through the United States of Amurrrica. Washington, Oregon, Texas, Louisiana, Tennessee, and Illinois are the states where the road took me… okay and the plane, and the bus and the train... Anyways! It was an incredible trip with a lot of memories, and some really vague memories which I will come back to in a later blog.

For this is blog, however, I am going to write about, and you might have guessed this already, Austin, Texas!

Now because I know the attention span of this generation is not very long I am not going to bore you guys with a lot of words and long sentences, which I know most of you are not going to read, but like it anyway while telling me what a great blog post this was. For the people that did make it until this point, good job! I like you, please like this post and comment on what a great job I did.

Here are the highlights of my visit to Austin!

Learning the two-step at the Broken Spoke
​
The Broken Spoke is one of Austin’s last authentic honky-tonks. What is a Honky-Tonk you might ask? Well, let me explain it to you. A Honky-Tonk, ladies and gentlemen and all who fall in between, is a bar that plays country music, usually live, to get people dancing. Now this is not the kind of dancing where people grind on each other and shake their butts like their lives depended on it. No, this is the kind of dancing that requires foot work and good coordination.

My mom and I, after heavy debating, decided to sign up for a two-step dancing class. This was as fun and exciting as it was awkward and terrifying. The instructor who taught the class was however the highlight of the night. Imagine a 60-year-old-something tiny woman with hot pants, a fake tan, shining white teeth, spunky short hair, the thickest Southern accent I have ever heard and a no bull attitude that cracked me up and had me terrified throughout the lesson.

I don’t have video footage myself but at the end of this post I've put a YouTube video of YouTube celebrities Grace Helbig and Mamrie Hart to give you an idea.

My mom and I were walking in Austin and we found this Cowboy hat store, so of course we had to go in and try on some cowboy hats. The best part about visiting this particular store was not only the hats but also the owners of the store. There were two 60-something women working there and they were so friendly, funny and welcoming. They helped us try out some hats and when we were done they told us stories about the store and one of them even taught me how to dance the two step in the MIDDLE of the store! (This was before we went to the Broken Spoke, so I had a slight advantage). I also didn't have a choice, when the lady heard that I didn't know how to dance the two step she just grabbed my hands and started dancing. We didn't end up buying hats because unfortunately those hats were not in our budget, but the whole experience was awesome.

I don’t think it’s a secret that Austin is home to great food places, especially Mexican. In Austin I had one of the best tacos of my life. Filled with brisket, cheese, and other stuff, it was everything I needed in a taco and more. I will not write more about the food because it just makes me hungry, so here (above) is a picture of tacos to leave you guys with a visual. 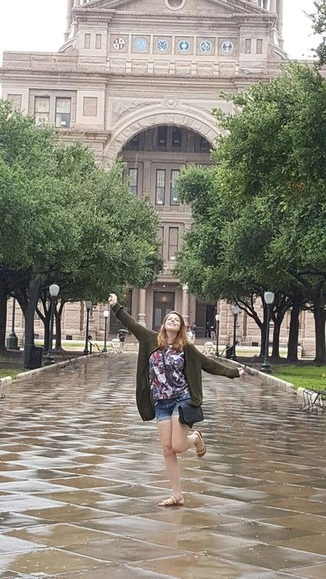