5 Top Dating Idioms  Part 2: Being in a Relationship

In my last post, we explored some popular slang and idioms used in the first step toward dating: The Hunt for a Relationship. Now you're onto the next step because you've finally met that one true love of your life and so far it's smooth sailing ("everything is moving forward without any problems")!

Below are some popular expressions you'll definitely hear from your American friends as they grill ("interrogate") you for all the deets ("details") of your new S.O. ("significant other").

In context:
I went to the movies tonight but it was hard to pay attention to the screen. There were these two people making out right in front of me the entire time!

In Slangman's "Real Speak":
I went ta the movies tanight b'd it was hard da pay attention ta the screen. There were these two people making out ride in fronna me the entire time! 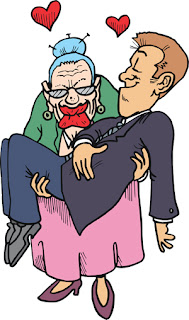 1. to rob the cradle = to date or marry someone much younger than oneself.

In context:
Joanne is 53 and Tony is only 22. I know she likes younger men, but that’s really robbing the cradle!

In context:
You're not going to believe what happened on our way to Hawaii. Just as we sat down in the plane, Greg took me by the hand and then popped the question!

In Slangman's "Real Speak":
Y'r not gonna believe what happened on 'ar way da Hawaii. Just 'ez we sat down 'n the plane, Greg took me by the hand 'n then popped the question!

In context:
Hey, congratulations! I heard you're getting hitched! So when is the big day?

In Slangman's "Real Speak":
Hey, congrats! I heard 'jer getting hitched! So when's the big day?

5. to go together = to date someone on a regular basis.

In context:
I had no idea Margaret and Bart were going together! They're as different as night and day!

To learn more American slang & idioms, visit us at www.slangman.com. Use Coupon Code: STUDYUSA for a 20% discount on all products during checkout!