From Student Blogger, Ravi: So, Wait! You Speak French!?

You may already know this but just for the sake of it, I am going to say it again. I am Ravi Raveendiran, and I was born in France. For those of you that don’t know where Sri Lanka is, it’s the small island located South of India. People often misunderstand that Sri Lanka is part of India, perhaps because it’s also part of the Indian subcontinent. Well, it’s a separate country that shares some cultural similarities with its Northern neighbor. My parents are from north Sri Lanka and they speak Tamil, which is also a language spoken in South India.

And why am I writing this blog? Since I’ve come to the U.S., whenever I introduce myself to someone after some chit-chat, the typical #1 question always comes up: “So, where are you from, Ravi?” and I just tell them that I am from France. I wish everyone reading this could see the reaction when I tell them I am from France. It’s priceless! I call that reaction “The choker.”

After they choke and settle down, they stick their neck out and question #2: “So, wait! Do you speak French!?” I also think that question #2 is asked because who would think that a brown looking dude would be French! Especially when you are from a small city like Reno. Believe me, I don’t blame anyone.

Anyway, when answering question #2, I get a little tempered and I just wanna tell them, “No, we speak Tagalog in France” but I am a nice person and simply say, “Oui je parle ​français​” just because I also want to be a little flattering. Finally, I like the end of the conversation because that’s when they tell me, “Oh, you don’t have an accent at all, I thought you’re from the U.S.” and I just say “Thank you, I worked hard to get rid of the French-Tamil mixed accent.”

I am actually writing this blog at a Starbucks close to UNR, sitting in the corner with my friend Junna while helping her with business statistics homework. Reno is a very small town so bumping into friends happens very often at Starbucks. And when that friend is introducing me to his or her friend, the same scene that I described above happens more or less in the same way! I now know what to expect before even the conversation starts!

Do I consider myself Sri Lankan or French? I never asked this question of myself when I was living in my little bubble in France. My family, my friends and my neighbors makeup that bubble. The bubble was well diversified and no one ever asked questions such as, “Where are you from?” Maybe it’s because we already knew each other or like one my favorite French comedians, Jamel Debbouze, says,​ “Y avait un vrai melting-pot. C'est quand t'as tes potes qui se melting. Tout melange. C'etait beau,”​ which translates to, “There was a real melting-pot. It’s when you have friends melting. Everything is mixed. It was beautiful.”

Growing up in France as a first-generation French in a house where every member of my family spoke Tamil, where we tried really hard to preserve our culture and roots was quite interesting. At home, I was raised a typical “Tamil boy,” I enjoyed my grandmother’s food, I watched Tamil movies, listened to Tamil songs, I spoke Tamil with the elders and French with my siblings. My siblings and I were raised “so Tamil” that whenever we visited Sri Lanka we had no difficulties to mingle.

Back home in France, as soon as I stepped outside our home, I’d be my French self again, hanging out with my “melting-friends,” go to school and live my French life. So, I could be in a French cafe where I know the barista who could be living in my neighborhood and I’d never have to worry about introducing myself or anticipating another conversation before it happens! 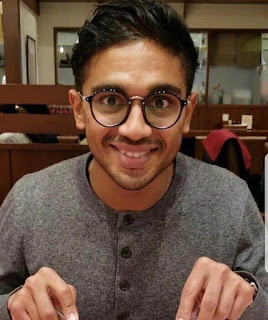 StudyUSA showed me the ways and helped me choose the best school and State of Florida as my best option!! Thank you StudyUSA !!