Northern Michigan University, located in Marquette, Michigan, is a dynamic four-year, public, comprehensive university that has grown its reputation based on its award-winning leadership programs, cutting-edge technology initiatives and nationally recognized academic programs.

Northern Michigan University, located in Marquette, Michigan, is a dynamic four-year, public, comprehensive university that has grown its reputation based on its award-winning leadership programs, cutting-edge technology initiatives and nationally recognized academic programs.

Northern Michigan has a population of about 9,000 undergraduate and graduate students. It offers 147 degree programs, including 25 graduate programs. 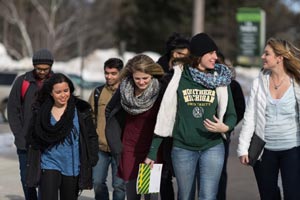 The university has two semesters per year, a fall and winter semester, and two summer sessions. NMU’s most popular bachelor’s degrees for international students include art and design, business management, computer science, construction management, and biology.

The university’s fastest growing academic areas are clinical science, biology, and the geographical and environmental sciences.

Some of the NMU degree programs to receive national or international recognition in the past three years have been art and design, business, computer science, education, English and nursing. Some unique aspects of Northern’s academic menu include:

NMU’s 1,100 employees view helping students succeed as not only a university priority, but a personal goal.

Northern Michigan University has two highly acclaimed leadership programs: the Student Leader Fellowship Program (SLFP) and Superior Edge. The SLFP, which has been in existence for more than 20 years, is a highly selective, two-year leadership experience for the 50 selected students each year. The Superior Edge program is open to all NMU students and has nearly a third of the student population participating in the program’s four edges: citizenship, diversity awareness, leadership and real-world application of classroom theory.

These two programs, along with NMU’s efforts in academic service learning, an active volunteer center on campus that does extensive outreach throughout Michigan’s Upper Peninsula region, and about 300 student organizations combine to make the NMU campus a place where involvement is a natural component of the Northern student experience. Northern is one of about 300 colleges and universities nationwide to have the Carnegie Foundation’s “community-engaged campus” designation. 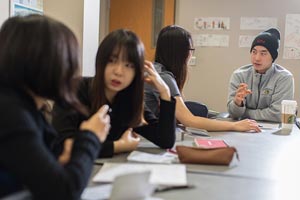 Over the past 13 years, Northern Michigan University has been selected for numerous international and national awards for its use of next-generation technology in the higher education setting.

NMU is one of the largest notebook computer campuses in the United States, with all full-time students receiving either a ThinkPad or MacBook as part of tuition. The university has been cited as one of the most wired and most densely wireless campuses in the country.

Northern was the first U.S. university to own and operate a WiMAX (4G) network, which now spans about 40 square miles. Northern’s work with WiMAX technology was so innovative it resulted in President Barack Obama choosing the NMU campus as the site to announce his national wireless initiative in 2011.

Northern’s hometown of Marquette is a city of 20,000 residents located along the southern shore of Lake Superior. Michigan’s Upper Peninsula region is known for its safe, friendly and natural environment. The Marquette community and Northern Michigan University are intricately intertwined, which adds to the vitality of the area and to the opportunities available to NMU students.