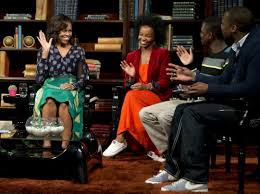 [caption id="attachment_1942" align="aligncenter" width="260"] Michelle Obama's Google Hangout[/caption] While on a trip to Senegal, South Africa and Tanzania with her husband, U.S. President Barack Obama,  First Lady Michelle Obama met with a group of students in Johannesburg on Saturday, June 29th. She spoke to the students about the importance of education and on having the courage and commitment to do your best in school. Ms. Obama cited South Africa-born Siyabulela Xuza, winner of the 2007 Intel International Science and Engineering Fair, who invented a type of rocket fuel while still a teenager, and her husband, President Obama, as examples of great men who have come from humble beginnings and have gone on to do great things and to make a difference in the world. In her 17 minute talk to the students before beginning a Google Hangout session, Ms. Obama drew from her own perspective and experiences as a former student. Michelle Obama also came from non-priveleged beginnings. She told the audience and viewers, "Here's what I learned from my own life experiences: you might not control what family you come from, you might not control what school you go to or how other people treat you, but you can control whether you do your homework each night." Ms. Obama also quoted her mother, who was in the audience, saying, "it isn't what people call you that matters, it's what you answer to," and went on to say, "you can answer to your own hopes and dreams." On the subject of persistence, the First Lady had this to say: "No one is born a rocket scientist. No one is born a president. You become smart and successful through hard work, by getting things wrong and then trying and trying again until you get them right." She concluded her talk by asking young people all over the world these questions: "What barriers will you break down?" and "What legacy will you leave for the next generation?" During the Google Hangout session Ms. Obama asked students to "start thinking about being citizens of the world," and to "start inspiring one another across the globe" through social media. The opening question for the Hangout was this: "How do you think social networks can help to improve education?" We'd like to ask the same of our readers. Continue the conversation by letting us know how you think social media platforms like Google Hangout, Facebook, Twitter, YouTube, Instagram, and any other types of social media you like to use, can improve lives and enrich the minds of tomorrow's leaders. Like you.