5 Top Dating Idioms Part 3: The End of the Relationship or "The Break Up"

Welcome back to our look into some of the most popular slang terms and idioms used in the dating world! We're now onto the final part of our dating series – Part 3: The End of the Relationship.

Hopefully, the following words will never be used to refer to YOUR relationship. But if they are, at least you won't be the last one to figure out that your relationship has gone to the dogs, is finito, history, has played out, down the drain, taken a hike, out the window ("ended")!

As you can already see, the words below are just scratching the surface ("the beginning") of some of the most colorful expression you'll hear in the realm of relationships!

(excerpts from The Slangman Guide to STREET SPEAK 3)

In context:
Steve and Janet broke up after being together for three years! I thought they were going to get married!

In Slangman's "Real Speak":
Steve 'n Janet broke up afder being dagether fer three years! I thought they were gonna get married! 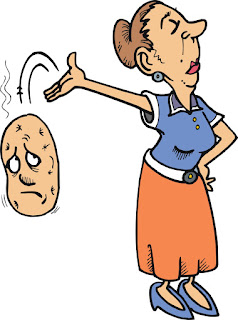 2. to drop someone like a hot potato = to leave a relationship quickly.

In context:
As soon as Irene found out Scott was cheating on her, she dropped him like a hot potato!

In Slangman's "Real Speak":
As soon 'ez Irene found out Scott w'z cheading on 'er, she dropped 'im like a hot patado!

3. to bust someone = to discover someone doing something bad.

4. on the rocks = said of a marriage that's not going well.

In context:
I'm not surprised Steve and Janet broke up at all. Their marriage has been on the rocks for months!

In Slangman's "Real Speak":
I'm not saprised Steve 'n Janet broke up id' all. Their marriage 'ez been on the rocks fer munts! 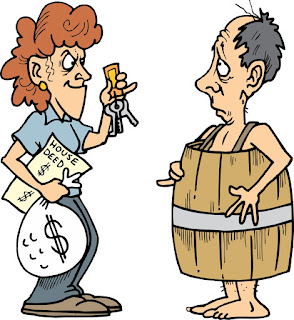 5. to take someone to the cleaners = to acquire all of someone’s possessions (or money) in a court battle.

In context:
After their divorce, Brenda walked away with the car, the house, and even his clothes! She really took Ernie to the cleaners!

In Slangman's "Real Speak":
After their divorce, Brenda walked away w'th the car, the house, an' even 'is close! She really took Ernie da the cleaners!

To learn more American slang & idioms, visit us at slangman.com. Use Coupon Code: STUDYUSA for a 20% discount on all products during checkout! Study in the USA was helpful to find information about colleges and feedback from other people.

Study in the USA helped to understand the admission requirements better and the selection process to scholar/fellowships.