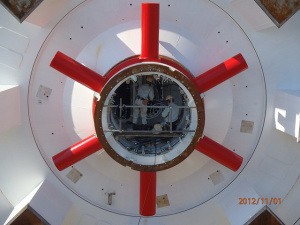 “It’s simply the natural enlargement of her sphere. Keeping house and raising a family are a woman’s logical tasks, and in principle, there’s no difference between running one home and a hundred thousand.”

The Alaskan Way Viaduct is being rebuilt due to studies of continuing ground settlement near Seattle's Elliot Bay which were conducted by a group of researchers and faculty from the University of Washington. Hitachi Zosen Corp. in Osaka, Japan was chosen to build the tunnel boring machine (TBM) or shield tunneling machine to do the work. Crews of engineering technology specialists in Osaka have spent the past 14 months manufacturing its parts from scratch. The result will be the world’s largest-diameter tunnel boring machine. The TBM is five stories tall and 57.5 feet in diameter and is scheduled to arrive in Seattle, WA early in 2013. It will start digging the Alaskan Way Viaduct tunnel beneath downtown Seattle beginning in the summer of 2013.

Let us know your opinions on mechanical engineering technology, the TBM, Bertha Knight Landes, and today's women in politics. We'd love to hear them!