How slow can you go? Engineering students take home top prizes at the Shell Eco-marathon. 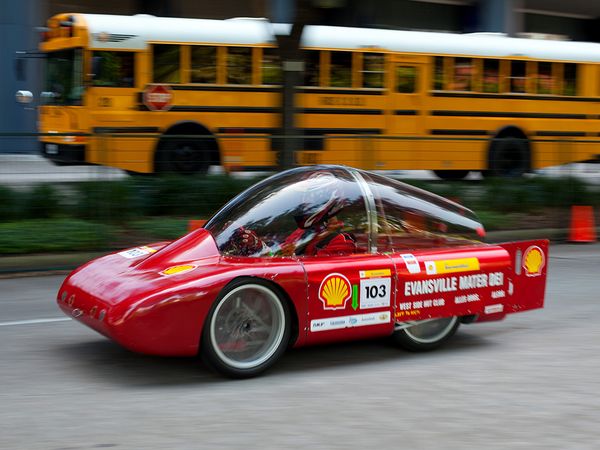 [caption id="attachment_501" align="aligncenter" width="600" caption="Courtesy of National Geographic"][/caption] The winners of the Shell Eco-marathon probably have drivers wiping away tears and gripping the gas pump in despair, while paying over $4 a gallon. The team from Université Laval in Quebec, Canada prototype managed to get...gasp...2,564.8 miles per gallon! Their remarkable numbers earned them the well deserved First Prize. Every year, high school and university students from around the world compete in Shell's Eco-marathon. Students are challenged to "design, build and test energy efficient vehicles," with winning titles going to "the teams that go the farthest distance using the least amount of energy." Check out National Geographic's image gallery of the event, here. Dressed in pink, the "ShopGirls" from Granite Falls high school in Washington state (my home state), were aiming to improve their vehicle and numbers. Courtesy of NPR:

"We moved things, like the mirrors used to be on the outside of our car," says senior and team manager Shante Stowell. "By putting them on the inside of our car, that makes us more aerodynamic."

The University of Missouri's College of Engineering team entered their Tigergen II vehicle for the second time and "won $1,500 for the first prize in the Urban Concept hydrogen class." Engineering students from MIZZOU compete in an array of challenges every year under the supervision of an advisor. [caption id="attachment_496" align="aligncenter" width="720" caption="Courtesy of The Mizzou Hydrogen Car Team"]

[/caption] The University of Missouri's College of Engineering is one example of how a U.S. program offers students a multitude of opportunities to apply their education in real world settings. This is one of the greatest aspects of an American education. Special projects give students a glimpse into their future careers, competitive resumes, and invaluable networking opportunities.