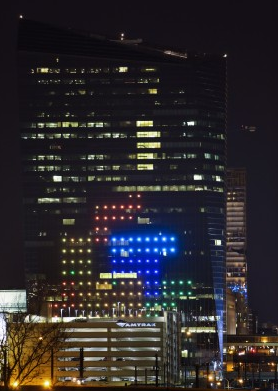 In our effort to bring good content to as many people as possible the text in this blog post has been machine translated so please excuse any mistakes. Thank you!
Photo: The video game Tetris being played on Cira Centre in Philadelphia
Our Happening of the Week pick:
The skyscraper-sized iteration of classic video game Tetris by Drexel University professor Dr. Frank Lee.
The event took place on April 5, 2014, 30 years after Tetris was first coded.

Drexel University professor Frank Lee, right, and game designer Henk Rogers play Tetris on the 29 story Cira Center
As part of Philly Tech Week, Dr. Lee's latest creation—a two-sided game of Tetris on the 29-story Cira Centre— illuminated the Philadelphia skyline for one night. The scene of the giant Tetris game in the sky, Cira Centre, is located in the University City district of Philadelphia.
Tetris was first released on June 6, 1984. According to The Washington Post, Tetris became a global phenomenon in the late 1980s after game designer Henk Rogers, who had seen Tetris at a trade show in Las Vegas, acquired the rights and struck a deal to put it on Nintendo’s original Game Boy.
Watch the video
Read more about Philly Tech Week