Getting inspired by the 2014 Academy Awards Ceremony 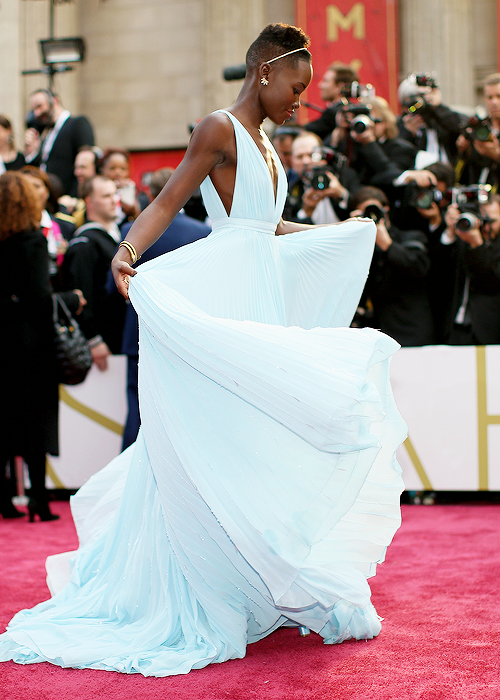 [caption id="attachment_2835" align="aligncenter" width="400"] Lupita Nyong'o at the 2014 Academy Awards Ceremony[/caption] This morning, on the day after the 2014 Academy Awards ceremony, it seemed that all anyone in the U.S. wanted to talk about was the Oscars. (Oscar is the nickname of the statuette given by the American Academy of Motion Picture Arts and Sciences to all Academy Awards recipients; it has also come to be the nickname for the Academy Awards Ceremony itself. If you say,”I watched the Oscars last night,” all Americans will know what you mean.) What’s the big deal? Well, some uninterested bystanders here in the US will tell you they have no idea. But maybe the reason so many Americans are enamored of this annual event is that they can take away from the festivities whatever they choose to. US schools and universities can take away a point of pride if a nominee or an award winner is an alumni (or, in some cases, a current student) of their school. Students can simply escape into the glamour, the fantasy and the pageantry involved, or they can learn the stories of these citizens of the world who have come from backgrounds as diverse as in any other profession, perhaps more-so than some, and believe that anything is possible if you apply yourself. In her acceptance speech for winning the Best Actress in a Supporting Role award, Lupita Nyong'o said, "When I look down at this golden statue, may it remind me, and every little child, that no matter where you're from, your dreams are valid." These are universally inspiring words and have already come to be considered a highlight of the 2014 Academy Awards Ceremony. We send a thank you to Lupita, and to all of those involved who are not just thinking of their own careers, but who are also thinking of kids and young adults all over the world who want to believe that they, too, can follow their dreams. About Lupita Nyong'o - Lupita Nyong'o holds Kenyan and Mexican citizenship, her ethnicity is Luo and she currently resides in New York City. Ms. Nyong'o attended Hampshire College, Yale School of Drama and Whittier College, all US schools. She lists as her occupations actress, film director and music video director. (Biographical information courtesy of Wikipedia/Lupita_Nyong'o.) #StudyUSA