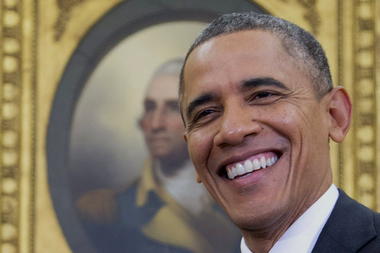 The punctuation assigned to Presidents Day, Presidents' Day or President's Day has thus been decided on a state-by-state basis. Some states choose to also observe the birthday of Abraham Lincoln (Feb 12) on Presidents' Day; some stick with celebrating only Washington's birthday, using the title President's Day. In still other states, according to Wikipedia, Thomas Jefferson's birthday, but not Abraham Lincoln's, is observed along with George Washington's birthday on the third Monday. What's becoming more and more common, though, is that many Americans use the holiday as a way of honoring all U.S. presidents. [caption id="attachment_2746" align="aligncenter" width="380"] President Obama stands in front of a portrait of George Washington [Carolyn Kaster/AP][/caption]Regardless of where you live or if you'll even be observing today's holiday, everyone can learn from former leaders. This morning Barack Obama posted the following on his Facebook page: "Every post is honorable in which a man can serve his country." —George Washington [caption id="attachment_2747" align="aligncenter" width="691"]

If you'd like to learn more about U.S. presidents, the Presidents Page on the official website of the White House is very useful resource.  Have a great day!     #StudyUSA