Being a Female in Engineering

You go, yes Brenda we all know that, but what is today's subject about? Today we are discussing gender inequality! Nowadays, when we mention the term gender inequality, it seems abstract. In fact, the term has lost most of its power over the last few years due to the awareness of the society about the subject. It is clear that today, women have gained some sort of power in society, they have proven that they can be as good leaders as men, they are no longer considered to be only housewives, but also active and productive individuals. However, even if the portrayal of a woman in the society has changed over the past few decades, people still have prejudices on what women can do in the workplace, the jobs they should have or should not.

What is gender inequality in the 20th century? Gender inequality is nowadays seen through stereotypes on women who pursue a male-dominated career, such as engineering. I am sure many of you know that engineering is a male-dominated field, which is the reason why the word “engineer” makes you think about a male engineer. In fact, for every six male engineers, there is only ONE female engineer. Isn’t this shocking to you? I mean, the engineering field is making amazing discoveries which impact our everyday life, and about HALF of the world population is female! It just seems right to have a female perspective in engineering. So, why is it that females are so outnumbered in the engineering field? And why did I choose to be an engineer?

First, because our society has been a patriarchal society for a certain amount of time, females have been underestimated. They were stereotyped not to be good at science, technologies, and math while it is not the case (don’t believe me? ask my math teachers). They were assumed to be only good at soft skills not technical ones. If it is true that most women develop soft skills by taking care of the household, babies … does it imply that women are only good at soft skills tasks? If you are a good baker does it mean you are a bad plumber? We develop skills by practicing! Unlike our inner abilities such as breathing, skills are acquired through learning. View it as riding a bicycle: you have to be trained to ride, you are not born with the ability to ride. See now how that argument collapsed?

Next, there are fewer females in engineering because of the way we educate our kids. Little girls usually play with dolls and makeup kits while boys play with construction games such as Legos. These construction tools develop the imagination, but also the spatial skills of those boys, which are important in engineering. Since most girls are not given the chance to play with games that can develop their spatial skills, less females choose to become engineers. This is also the reason why some females drop out from engineering — and I know what I am talking about here (not that I am planning on dropping from engineering). Take me for instance, I am a bioengineering student, which means I have to take engineering classes! This semester for the first time, I am enrolled in an engineering class, and I may confess that it is not my favorite class. Not that it is horrible, but it is a class in which I have to put more effort. I am not blaming my parents for not buying me Legos when I was younger (Hey mom, hey dad, love you!), I blame society for thinking that Legos should only be for boys. Whether you want it or not, this male-dominant-mentality is inked in our society, and it will take more time to let it go.

Lastly (just to name a few), as simple as it may seem, many female college students do not choose engineering as their major because there are not a lot of female role models in engineering. And this makes sense because sometimes you need inspiration and examples to follow. If nobody who looks like you does it, why should you do it? You might think if many females are not engineers it may be because they are not capable of succeeding in such a field. So why should YOU go on such a path?

The next question is why did I choose to become an engineer if there are few of us in the field? Well, I am not letting the society or anyone else define what I can and cannot do, and you should too! We usually underestimate ourselves, but we all have so many potentials. Everything is possible if you put in the work and if you give yourself the tools to succeed, you will! (Little pep talk here.) This is literally my motto. I believe our thoughts are our own limitations!
So, yes engineering is not my favorite class, but I am giving myself the necessary tools to succeed. Yes, I may feel lonely sometimes being one of only a few female students in the class, yes there are a few representations of people who look like me in the field, but hey, that is what I chose to be! And I am aiming to increase not only the number of female engineers, but I am also aspiring to increase by one the number of role models. The sky is the limit as they say! Follow your dreams people! No one will if not you. Oh! and folks, a female engineer is not necessarily a feminist. So many people have in mind that women choose to become engineers to prove that they can be better than man, but we choose to become engineers because that is what inspires us. Last thing, feminism is not hating men! It is about having the same equalities as men and if you think we do not need feminism, many men will not be in such uprulers about feminism.

Until next time, stay safe and see you on my next one. Aurevoir! 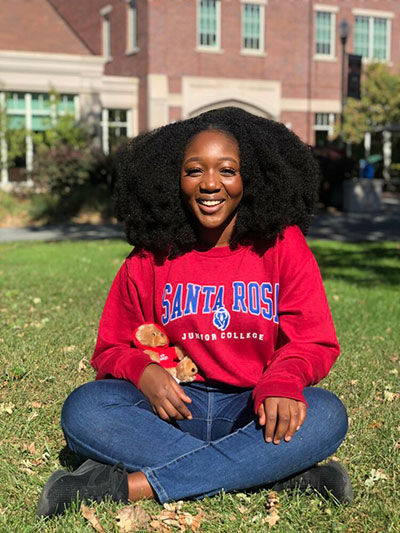 Brenda Ametepe is a bioengineering student in Santa Rosa Junior College, California. She is passionate about the biology of the human body and aspires to become a medical doctor in the future.

Exploring your options: A look at community colleges Find the right path for you at Shoreline Community College! My Hour with Dr. Hilgersom: Your Chance to Get to Know a Community College's Passionate Leader StudyUSA has helped by providing necessary information about studying in the USA. The articles related with the US as a international student has been very useful.