Are Scooters an Effective Transportation Option in Austin?

One of the characteristics that surprised me when I got to Austin, Texas, for the first time was its modernity. The big number of motorized scooters that you can find through Austin’s streets reflect this contemporary characteristic. A few days ago, I was talking with one of my professors about the efficiency and convenience of using a scooter as one of your daily transport, and I think that the opinions we exchanged are worthy to analyze.

Since the industrial revolution, the transport segment has massively evolved, and the all-new scooters are evidence of this positive change over time. These motorized scooters have an amazing electric system which gives their users a great experience; nevertheless, their introduction in the transport segment is controversial, causing a broad difference of opinions within the society. It may be true that many people have a few concerns towards this way of transport, but I believe that its potential benefits in this segment outweigh its potential dangers to the society.

Not too many years ago, the city of Austin incorporated what is called micromobility services, also known as dockless mobility. It is important to say that these devices differ from other shared mobility services like smart cars, smart electric vehicles, and personally owned bicycles; therefore, they are not part of the same segment of transportation. The current brands with licensed contracts to operate in Austin and that in my opinion are the leaders of the market are Lime, followed by Bird, Jump, and Lyft.

Using micromobility services like scooters implies education, caution, and should always be used safely. However, there are big concerns within the society towards this topic nowadays. For instance, many Austinites argue that scooter users are reckless and do not have the education expected from a rider because they do not follow the laws and regulations implemented by the government; for example, not giving preference to pedestrians, not following the designated areas of usage, or not wearing the required protection.

Although sometimes these situations might be true, in my opinion I think that we cannot generalize because not all scooter users have that behavior. Furthermore, the laws and rules change constantly, so not only the ones in favor of scooters, but also the ones who oppose should get informed about the rules regularly. Furthermore, some pedestrians and drivers are dissatisfied with the micromobility service and they often ask themselves if these electric devices are beneficial for the community. The reality is that they are. These scooters took the transportation segment to the next level and have become extremely popular in cities all around the globe. Compared to my hometown, Austin has a lot more scooters than Queretaro, so definitely as an international student I was amazed when I saw several people happily riding one of those.

All in all, despite the arguments that disagree with scooter usage, these devices revolutionized the transport segment and took it to the next level in just a couple of months. Now these are one of the main transports preferred by most Austinites. There is no doubt that using scooters is fun, easy, fast, and in some cases, even cheaper than other traditional ways of transportation; so in my opinion and personal experience, if you are from a developing city like me and you have never ridden a scooter, I encourage you to hop on to one if you ever go to Austin because even most of the streets of the city are now adapted to make your ride more enjoyable. 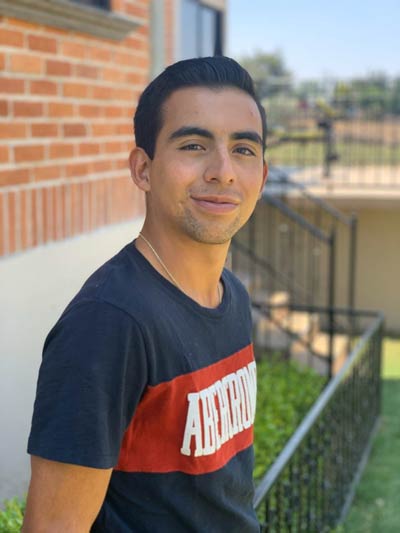 Miguel Angel Cornelio Martínez from Mexico City, Mexico, is studying an intensive English language program at The University of Texas at Austin. He has been residing in the United States for seven months and will start his college studies in August 2020. Miguel loves practicing sports; however, track and field and mountain biking take a deep part of his heart. Miguel finds Austin a great city to study abroad, and he enjoys spending time in its green parks. I encountered StudyUSA while I was at Amideast, in West-Bank. My dream was to study in the United states, and StudyUSA helped me by giving me instructions on how to fill my application step by step, and helping me with the trusted universities I should apply to. Thank you.