Knowing I was able to help my deaf brother become more independent through technology changed my life. I grew up thinking that robots, tools and Legos were for boys, while dolls, make up and teddy bears were for girls. The toy stores said so, TV commercials said so, and society in general, said so. Eventually, it became my point of view as well. Growing up, I wasn't too interested in science and technology and I thought that if I were to talk about those things, I would sound “nerdy” and “less feminine”. However, when I was 18 I was selected to participate in RUTA IN, a tech camp where 20 students from Costa Rica (my home country) get together each year to create prototypes that give solutions for our society through technology and entrepreneurship. Experts in the field would train us to use numerous tools and methods, so that each team could come up with a product that would create a positive impact on our country and the world. On the first day of camp, I was terrified. I didn't know much about coding or prototyping, and I was surrounded by very impressive people. I felt overwhelmed and I feared that I wasn’t good enough. As my team and I started our creative process, I could only think about my little brother. 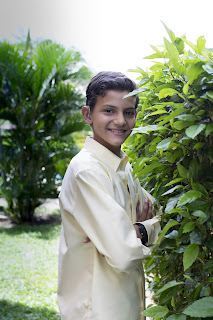 Sebastian was five years old when he was able to hear for the very first time, after receiving a cochlear implant. Since then, it has been a hard-working journey, where as a family, we have helped him develop his language skills. There has always been a problem, though. Sebastian relies 100% on his implant to hear and, at nighttime, he has to take it off. On early school days, he depends on my mother to wake him up, since he can't hear an alarm on his own. So, my team and I decided that we were going to create a prototype that would help him wake up independently: The Joy Up Pad. My team and I created a pillow pad looking prototype that was programmed to vibrate at a designated time and would have augmented vibrations every certain frequency, programmed by the user. We also created The Joy Up App, which allowed the user to set what time the Joy Up Pad would start vibrating, at what level and how many times per sequence. Then, the user would only have to insert the thin and light pad under their pillow and the programming would do the rest. Those 8 days of hard work and getting to create something unique was so thrilling and empowering. I would idealize how our product could be better for my brother and eventually for the deaf and hard-of-hearing community around the world. I felt so challenged and excited, grasping new knowledge and skills every minute. What I loved the most was realizing I was capable of using technology to come up with a solution and create whatever I wanted, despite my limitations and fears. Because deep inside, I was still scared.

When I was nine years old, I was diagnosed with moderate neurosensorial hyperacusis, in other words, I have a hearing loss. My parents, the doctors and I were shocked. How did I learn to speak two languages growing up with a 35-40% hearing loss? How did I not notice that my hearing level was below average? But, how could I compare if it was all I had ever known? All of these questions came into my mind at the time. Days later, I was told I had to use these weird and big devices called hearing aids so that I could hear better. I refused immediately. Why would I need them? I had done it on my own for nine years and I was fine. I didn't want my friends to think I was different, and I definitely did not want to use those awkward devices... so I didn't. At nine years old I decided to deny the fact that I had a hearing loss. I kept on living my life as if I were completely normal. I kept reading people's lips discreetly, I always sat in the front row at school and, frequently, I would just nod and pretend I agreed on whatever someone else was telling me. It wasn't easy, but to be honest, I was too scared to be different. Too scared to embrace who I was. I was shutting down all these beautiful sounds I had never heard before, just because I couldn't see the wonder and magic of hearing aids’ technology. 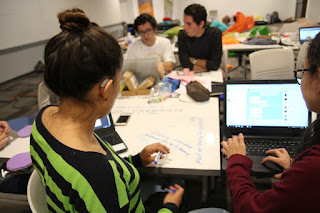 Working on the Joy Up Pad for my brother, wearing my new hearing aids :)

Eight years later, at 17 years old, I finally decided to accept my condition and get my hearing aids. I was feeling frustrated and I was struggling in school. I started to wonder if there were more sounds out there and I imagined what it would be like to not feel uncomfortable and excluded in many situations. Every time I remember what it felt like when I tried my hearing aids for the very first time, I can't help but smile. Birds chirping and tweeting, children at the park playing from afar, my shy classmate's tone of voice, my mom's holler from the other side of the house, new musical notes... I could hear it all. I feel so lucky and fortunate that I can now hear everything so clearly and beautifully. Getting hearing aids gave me the confidence to try new experiences such as RUTA IN and Hackathons, learning two more languages, speaking at conferences, and making one of the best decisions of my life: to study abroad. I deeply believe in the power of dreaming and taking action on those dreams, and studying abroad has always been one of mine. Even though Costa Rica is my home and I love my country, I decided to move out of a deep desire to explore beyond borders, to get to know new people, new cultures and to discover what I am capable of achieving outside of my comfort zone.

It is now my ninth month here in Reno, Nevada, and it has been absolutely incredible! I love going to school here, living in the “biggest little city in the world” and getting to know people from around the world. Even though the experience has also been challenging, it has been so fulfilling to look back and know that I am not scared anymore. I now see the world with a new refreshing perspective and look forward to what the future holds. I dream of creating technology that will touch people's lives and that will make a more inclusive world for everyone. What I dream of the most is reaching out to young girls all over the world that feel like they only belong in the dolls’ aisle at the toy store, and I want to empower them through what they can do with technology, leadership and courage. I want to help different cultures understand each other better and I want to provide opportunities for those who are voiceless in this world. May I never lose my wonder and high hopes for a better tomorrow, because I vow to dedicate my gifts and talents for what I so strongly believe in. As I continue to lose my fear, I am convinced that it will have no power over my decisions and actions. Instead, I want to rejoice every day in the opportunities that I have been given to leave a positive mark on this world. 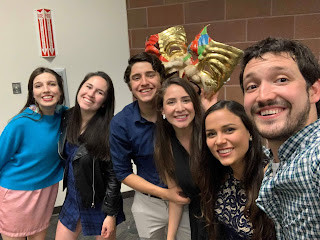 Valeria Saborio is from Costa Rica and is pursuing her Industrial and Systems Engineering degree at Truckee Meadows Community College in Reno, Nevada. 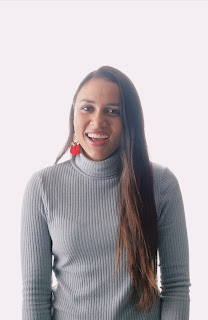