In today's’ blog entry I talk about food but specifically my grandmother’s. Who doesn’t love food? Everyone does! (I hope …) When it is food that you’ve been eating your whole life and when it’s been cooked by someone you love it is very hard to describe the level of satisfaction especially when you eat that particular food after three years!

Three years ago I went back to France after graduating from TMCC. The minute I booked my plane ticket all I could think about was Appachi’s (my grandmother’s) food. I could feel the taste of her food at the tip of my tongue as well as the aromas coming right through my nostrils. After an 11-hour flight, getting cramps because of my long legs and eating crappy food on the plane, I finally arrived home! Appachi gave a me huge hug and I felt her tears of joy running down on the back of the neck and she finished her hug with a kiss on my forehead. Her first words were “Hurry, go take a shower, I will prepare your plate!” So, I ran upstairs, took the quickest shower of my life, ran back downstairs, jumped on the countertop, held the plate in the palm of my left hand and dove into the food with my right hand! I had my first bite and I instantly started to cry because I missed her and the food so much! There are no other words to describe that day!

Growing up, my parents, my uncle and my aunt were working hard to provide for the family and the only person they could trust to take care of us was my grandmother, so I grew up with my Appachi.Appachi is the toughest woman I know and the person that I love the most in this world! She loves to cook for others; no one can ever leave the house without being asked to eat or sometimes they are simply forced to eat. Yup, that’s my grandmother, she has quite a character!

We were six grandchildren growing up with her and we, besides cooking, meant the world to her. We would fight over each other to prove who loves her the most! That should give you an idea of how much Appachimeant to us.

I remember coming back home from school for lunch and each grandchild would have their favorite dish ready to eat. She would cook whatever we asked her the night before, we didn’t realize that it was a lot of work for Appachi so our parents would be angry at us for making her work a lot but she just loved it so much that she would tell us to ignore our parents. On a side note: I was a terrible teenager and one of my ways to deal with those emotions was by yelling at my grandmother when the food I expected was not there. After yelling at her I would run upstairs to my room and I’d be sobbing not because my favorite dish was not there but because I yelled at her. However, when I’d come back downstairs she would act like nothing happened, wipe my tears and she would serve the same food I rejected to eat. She knew that I would come back and eat because her food is awesome. I told you she is a tough woman and she knows each of her grandchildren like the back of her hand. 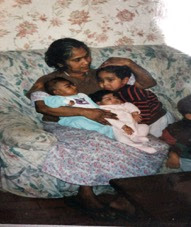 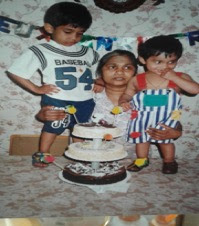 On the left is me crying with Appachi because I was jealous of seeing my sister and my cousin in her arm! The picture on the right is my brother, Appachi and me celebrating his birthday.

The only time we would make her miserable is when we would eat out. She’d get very angry and make that disgusted face when we’d tell her what we ate that day at a restaurant. Combine a disgusted face with her saying, “Why would you eat crappy food for money?” That face is the funniest face she makes every time she disagrees with something we’ve done. 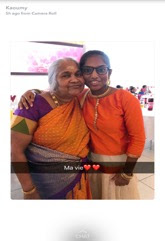 So this is Appachi and Gavmy. She thinks that she loves our grandmother more than everyone else but we all know that it would be me!

After I came to the United States, I started to crave Appachi’s food and I’d call her and ask her for recipes. She would laugh at me and ask me, ”What recipe?” and say: “Just take a piece of paper and write down what I am telling you. So, oil, onion, mustard seed, fennel seeds, curry leaves, the curry powder I sent you, ginger/garlic paste, chicken, salt, no water, that’s it:  chicken curry!”

And now I’d have the angry confused face and I’d be like, what you just gave me is the ingredient list. How about the measurements? And she’d just laugh again and say, “Just feel it, taste it, and put more or less stuff, Mokka.” (Mokka means dumb in Tamil).

“What do you mean “feel it?” she told me. “If you remember the taste of my curry, you will eventually reach the taste by modifying the ingredients.” I was very lost at that point and I just told myself, Grandma’s always right, Ravi. Just feel it.

I kid you not that it took me another two months to feel the measurement and reach somewhat the taste of my grandmother’s curry. But hers is always better—cannot beat Appachi! “C’est vraiment pas de la tarte” is a French idiom meaning this is really hard work. But if you literally translate this phrase, it means: “This is really not tart!”

In France we have a lot of idioms involving food that aren’t necessarily linked to food in meaning. Being a foodie, it took me a while when I was a kid to understand what those idioms mean because I would look for the tart and be like, “Well, there is no tart, why are you talking about tart?” Plus the worst part is that it would make me hungry. Ce n’etais vraiment pas de la tartewhen I first tried to replicate my grandmother's chicken curry. 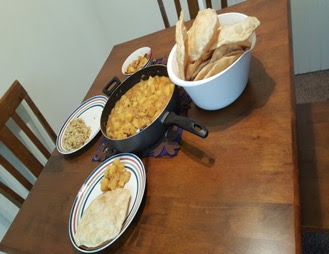 My first try at chicken curry rolls on the left. Puri “unleavened deep fried bread” and potato curry on the right.

*This idiom is a negative version of “to be a piece of cake”. You use it to say something is difficult. Literal translation: it’s not tart.