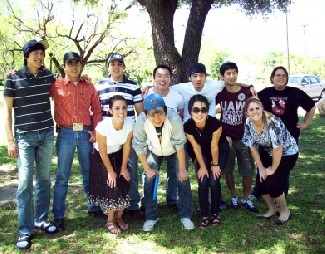 In our effort to bring good content to as many people as possible the text in this blog post has been machine translated so please excuse any mistakes. Thank you!
International student enrollment is at its highest at Angelo State University in Texas with 27 countries represented Angelo State University’s Center for International Studies student exchange program started with two German universities and has since expanded to include 27 countries. “I think we have the highest number of international students on campus and they’re regular students—they’re our students,” Study Abroad Coordinator Dr. Edward C. Olson said. Senior Guebin Rhim had contacts in Texas before she decided to apply to ASU from South Korea. Rhim’s sister lives in Dallas and she has friends attending UT in Austin. They told her of similarities between the Mexican and Korean cultures. Rhim returns to South Korea in May 2014 and plans to graduate and become a journalist, and she learned about a favorite American past time while living in Texas. “I love football,” Rhim said. “In Korea, I never understood why Americans loved their football so much. I went to my first game at ASU and I am learning to understand the rules. I think it’s because I have a team of my own to root for now. I like the [ASU] Rams and the Dallas Cowboys.” The CIS offers its international students a host family program, which provides a network of support for living in a new country. Senior Menno de Haan said he likes Texas because he feels part of a community. “People are more individual in Holland,” said Haan. “We like to do our own thing and want to be with our own best friends and family; it’s not common to make new contacts over and over again.” Haan visited New York in April and plans to travel to Dallas, Houston, San Marcos and San Antonio before his return to the Netherlands in December 2013 to finish his studies and start his own business. Senior Anne-Sophie Pourrier said she didn’t know what to expect before moving from France, but she knew that religion was important to people in Texas and was afraid they would be close-minded. Pourrier said she found that religion is indeed present but was pleased to find it influenced people in a good way. A bigger concern for Pourrier is a Texas icon she finds too plentiful. “The trucks are not eco-friendly at all and useless in most cases,” Pourrier said. Pourrier plans to return to France in August 2014 and continue her studies for a master’s degree. ASU did not have a formal, organized study abroad or foreign exchange student program until the early 1990s. Olson and Dr. Sharynn Tomlin, CIS director and professor of Lüneburg and Hanover in Germany to discuss the possibilities of establishing an exchange program. “When we formalized the center, at least on the study abroad side, we developed principally summer programs, but we also have opportunities with some institutions to send a student for a semester or an entire academic year to study in France, Scotland, Italy, the Netherlands, Germany and now South Korea as well,” Olson said. Students remain enrolled at ASU while studying abroad and can receive financial aid, including the same scholarships and federal assistance they would receive if they were studying in Texas. Students must meet the center’s requirements to be accepted into any study abroad program and may also receive an International Studies Scholarship. “Basically how those exchanges worked is that we would agree to take so many of their students over a three-year period, and then they would agree to take so many of our students over a period of time,” Olson said. “We have many more exchange programs now and they don’t all work the same, but our biggest exchange has been developed with several institutions in South Korea.” International students apply to ASU through their universities, pay the required fees and send their transcripts to be evaluated for transfer credit. ASU requires every applicant who is not a native speaker to have a sufficient knowledge of the English language. Applicants can demonstrate English proficiency by showing passing grades in English language classes, graduation from an accredited U.S. institution, or passing grades on English proficiency tests. Another option is completion of ASU’s English Language Learner’s Institute (ELLI) program, run bythe Center for International Studies. “A good number of [exchange students] don’t have the English language skills to be able to enroll in regular classes, so they come in and study English during the summer, and if they master a certain level they enroll in the fall,” Olson said. Reprinted from: ASURamPage.com More info on Angelo State University