Countdown to Launch: George Mason University Engineering Students Team Up to Reach the Starry Heights with a Satellite

"Everyone owned a piece of the project, which helped manage the workload." — Lena Elhajj, a senior in systems engineering

"It takes coordination to do a project this big. Testing is half the project, but it’s hard to believe it until you see it.” — Matthew Herman, a senior in systems engineering

“We all had different ideas of how things should be laid out. Every time we had a meeting, we worked together and talked through our differences.” — Brandon Goodrich, a senior in mechanical engineering

“The long-term goal is to engage senior design students in designing their own satellite and their own path to space.” — Peter Pachowicz, associate professor of electrical and computer engineering

A senior design team with 14 students from three engineering departments worked together all year on three experiments that are being integrated into one small satellite about the size of two smartphones.

The satellite, called a ThinSat, is scheduled to take the science experiments into Earth’s lower orbit next spring on a rocket, whose main mission is to deliver cargo to NASA’s International Space Station. ThinSats piggyback on the cargo mission. 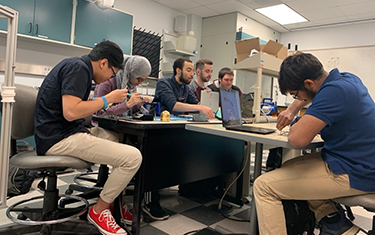 Mason engineering students from three departments worked together on a senior design team to create three experiments that will be sent into the Earth's lower orbit on a small satellite, called a ThinSat. Pictured from left to right: Le Truong, Hina Fatima, Jeremiah Terrie, Alex Mourao, Brandon Goodrich, and Tameem Siddiquee.

“The students from different disciplines cooperated to design, implement, and test the experiments and then integrated everything into an infrastructure that complies with NASA requirements,” says lead faculty advisor Peter Pachowicz, associate professor of electrical and computer engineering.

Students in the Department of Systems Engineering and Operations Research (SEOR) provided the parameters for the designs and helped test the projects after they were created, while seniors in Electrical and Computer Engineering (ECE) and Mechanical Engineering (ME) created the hardware and software for the experiments, which include:

The students got experience in real-world engineering, says Lance Sherry, an associate professor in systems engineering and operations research. “When we build aircraft or other complex systems, there is never enough time, space, or energy.”

One of the biggest things the students learned in this is how to allocate limited resources to come up with an optimum design given the constraints, he says.

After the ECE and ME seniors built the components of the experiments, they gave them to the system engineering group to integrate into the ThinSat to start testing.

One test included putting the ThinSat onto a vibration table, then shaking the table for a couple of hours to simulate what it’s going to be like when the launch takes place. “It’s a very rough ride,” Sherry says.

Another test put the batteries into an increasing vacuum until they popped. “Better to find out what the limits of the design are in the lab than after it’s launched,” says Lena Elhajj, a systems engineering senior. 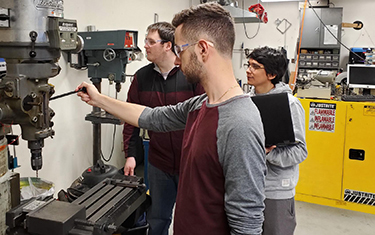 Brandon Goodrich, a senior in mechanical engineering who dubbed the team Asteria after a Greek goddess of the stars, says the experience taught him valuable lessons about working with people with diverse design perspectives. “We all had different ideas of how things should be laid out. Every time we had a meeting, we worked together and talked through our differences.”

Hina Fatima, an ECE senior, agrees. “The ECE students looked at the project in terms of circuit components. The mechanical engineering seniors considered the materials that are allowed in space, and the systems engineering students were looking at whether the mission meets all the requirements and goals.”

Everyone owned a piece of the project, which helped manage the workload, Elhajj says.

It takes coordination to do a project this big, adds Matthew Herman, a systems engineering senior. “Testing is half the project, but it’s hard to believe it until you see it.”

Virginia Space and Twiggs Space Lab, the projects’ sponsors, are testing Mason’s ThinSat in a high altitude balloon to make sure everything is launch ready.

Next year, the satellite and other ThinSats are scheduled to launch in a rocket from the Mid-Atlantic Regional Spaceport, Wallops Island, Virginia.

Juniors are waiting in the wings to take over the projects, as well as design other experiments for another ThinSat, Pachowicz says.

He has other aspirations for future engineering students. “The long-term goal is to engage senior design students in designing their own satellite and their own path to space.”

“Mason is uniquely positioned to provide students this incredible hands-on learning opportunity in one of the fastest growing engineering fields,” Sherry says.

The seniors on the team included: