Southern Illinois University Carbondale (SIU) nears the 60th anniversary for its nationally recognized aviation program. What started as a service unit of the university offering flight classes with four airplanes and spare parts has transformed into one of the nation’s leading comprehensive aviation programs with multiple degree programs, a state-of-the-industry facility and more than 600 students.

Thomas Koebel, a senior aviation technology major from St. Charles, Illinois, said there were several factors in his decision to attend SIU – the varying types of aircraft within the program, the faculty and the airport’s location near campus. He is president of Aviation Ambassadors, a registered student organization that represents the program at a variety of aviation events and gives tours to prospective students and their families.

Koebel is also working toward an associate degree in aviation flight and will graduate in August. The hands-on component students receive in training from faculty who also had industry experience is vital, said Koebel, who is now working to reassemble the engine on a Piper Tri-Pacer airplane.

“All of the instructors are super well versed in the areas they are teaching,” he said. “That is a really big factor on them being able to demonstrate and instruct the material because they have real-world experience and know what they are talking about.” 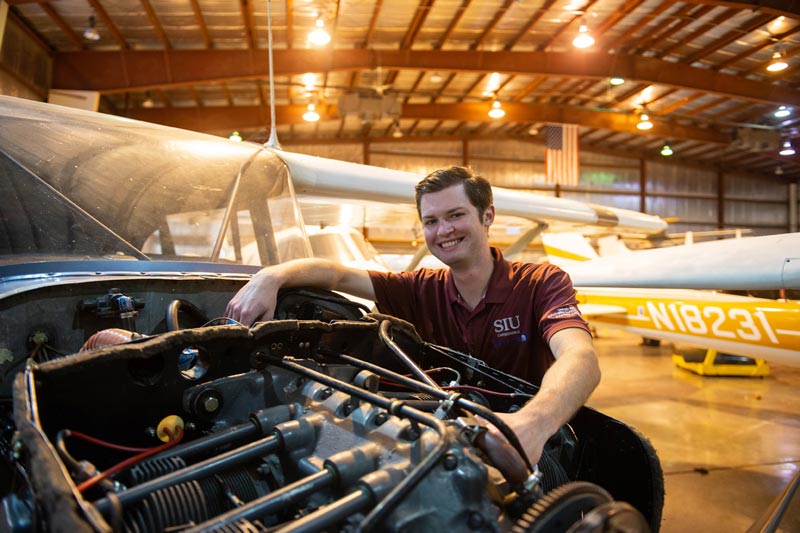 The program’s instructors, their passion for aviation and the varying types of aircraft were among the reasons Thomas Koebel, a senior in aviation technologies from St. Charles, Illinois, chose SIU. He is working to reassemble the engine on a Piper Tri-Pacer airplane. (Photo by Yenitza Melgoza)

The fall 2012 opening of the university’s Transportation Education Center at Southern Illinois Airport was critical for both the aviation and automotive programs – allowing both programs to move from aged facilities in several locations into one primary building, along with an adjacent aviation engine research test cell.

And the improvements continue. In November, the program is slated to pick up five new Cessna 172S planes, featuring Garmin G1000 avionics and the first planes within the program to feature auto pilot.

“Because of that connection to United and many other aviation entities – from airports to aerospace manufacturers, alumni have been another key aspect of our program,” NewMyer said, noting the program maintains a connection with more than 7,000 aviation alumni.

The aviation technologies’ program link with Shenyang Aerospace University in China is also something Burgener is excited about. Finalized in September 2019, the program is designed to work as a “2+2” degree program where Chinese students attend classes in China for two years and then attend SIU Carbondale for their final two years.

Burgener taught the first two classes to 75 Shenyang students online this summer. The challenges included the time difference, where he began at 8 p.m. to correspond to 9 a.m. the next day to students in China, along with navigating Chinese technology. Burgener was limited to software available in China and was aided by a teaching assistant there who helped with grading and communication with students. The courses were a math-based statistics course with an aviation focus and a propellers course.

“If we can improve aviation safety anywhere in the world, then that is a benefit to aviation,” he said.

The combined student enrollment from the three programs has increased from 441 in 2017 to 612 this fall, including 140 students enrolled at six off-campus locations in California, Illinois, North Carolina, and Pennsylvania. Even with layoffs within the aviation industry due to the COVID-19 pandemic, the 2020 Boeing Pilot and Technician Outlook notes the industry’s resiliency when faced with periodic downturns and projects an increasing demand for pilots and technicians as the “long-term need remains robust.”