How to Overcome Procrastination While Studying 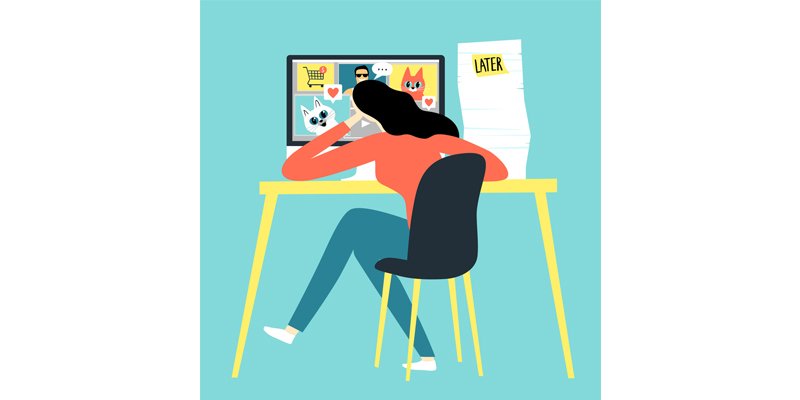 The word procrastination derives from Latin. “Pro” means forward or in favor of, and “crastinus” means of tomorrow. It ultimately means “in favor of tomorrow.” Interestingly, the etymology perfectly describes the conduct.

Procrastination is the act of avoiding starting or finishing a task by a deadline, whether it be immediate or distant. The continuous delay is made consciously despite being aware of imminent negative consequences.

According to a study by Dr. Joseph Ferrari, everybody procrastinates sometimes, but 20% of the U.S. population are chronic procrastinators. Other research found that 32% of Canadian students experience severe procrastination problems that are negatively impacting their social and academic life.

We can assume that the problem is widespread through the general population and is something that most cultures experience. To improve, we must understand the problem and experiment ways of defeating this habitual behavior.

The psychology of procrastination

Piers Steels, Ph.D., conducted a meta-analysis on procrastination in the last few decades and concluded that there are four main causes of continually postponing assignments

Only one — or worse — a combination of the above points may lead to procrastination in most healthy individuals. The idea is to question every point, understand the psychological ramifications, and go from there.

The first step in solving a problem is admitting you have it. Ask yourself some simple questions and try to respond with complete honesty:

The third point seems to be the easiest cause to combat because it has to do with our surroundings: smartphones, social media, video games, and so on. Create a workspace that is physically free from such distractions. Leave your phone on mute in another room, ask housemates to be quiet, and use focus applications on your computer. Alternatively, change the workplace entirely. Go to a library, coffeehouse, or park.

The rest, however, has to do with our brains. It’s vital to understand how to “trick” our mind into rethinking issues and getting stuff done. Let’s break the primary causes down into everyday concepts:

The job seems way too big

This issue derives from immediately thinking that the task is too large to be accomplished and abandoning hope from the get-go. It’s a superficial mentality that avoids analyzing the problem and devising an attack plan.

Instead, you should section the job in several smaller but more attainable tasks and proceed step by step. Create artificial deadlines for each sub-task to stay on the program. The most challenging part is starting, performing that first step. Then, momentum will help you follow through.

Not knowing what to do

Relating to the first issue, many students think they lack the fundamental knowledge to accomplish an objective. That is “too hard” for them. Although many students have learning gaps, the idea doesn’t necessarily apply. Sure, you might lack the skills to complete it fast or flawlessly, but you can research, brainstorm, hypothesize, ask others, and so on.

It’s vital to start and not set perfectionist goals because you can easily fall into the mentality of “if I’m not able to do it right, I’m not going to do it at all.

Perfectionism was somewhat discussed in the last point. However, it seems to be a recurring challenge for most procrastinators. They think that the only acceptable result is a perfect one, which isn’t objectively true.

You should always remember that science and society were developed through trial-and-error, and only by committing mistakes can we learn.

This concept relates to both organizational and emotional disputes about other competing tasks and desires. It’s essential to rationalize the order and importance level of different actions.

For example, we know that watching TV is not as important as doing homework. It doesn’t mean you should never watch TV and do homework non-stop. Rather discipline yourself to do homework first, then watch TV afterward. Think about how you’re going to enjoy TV, even more, knowing you’ve done your homework for the day. Contemplate on the negative emotions of stress and worry when you’ve chosen to watch TV before finishing your assignments for the day.

Many students think that doing the work itself doesn’t yield great rewards, so it doesn’t motivate them. Good grades on a paper might just not cut it as motivation.

For instance, compare studying or working to eating and drinking water, and playing video games or checking your phone to non-essential activities such as taking a walk or a bath. Try to pair studying/working with survival. That doesn’t mean you should become anxious but rather change perspective. Also, you can reward yourself by indulging in something you like, but only after you’ve completed a task.

The idea that once you become successful, you must maintain status scares a lot of people, not just procrastinators. It’s the consistency “at all costs” that’s scary, not reaching an instance of success. However, you must realize you’re not competing with anybody but yourself.

You don’t have to maintain podium status infinitely. It’s OK to fall — and even fail — sometimes. Excellent high school students might suddenly find themselves as average in college and become demoralized. Despite this, the only crucial thing is to try your best.

This final point seems to include all the above. Lacking the determination to work for more than five minutes is a problem for most procrastinators. Having a low-attention span can be resolved by eliminating immediate distractions and using the Pomodoro method, which involves interval studying, creating checkpoints every fixed period.

For example, set up a timer every 15 or 25 minutes. Force yourself to do nothing but study in this interval. After it rings, set it up for 5 to 10 minutes and take a break. Nevertheless, this doesn’t mean you should necessarily check your phone immediately, as it may reinforce negative behavior. Instead, walk around, drink a glass of water, eat, and relax a bit. Repeat the process until you’ve achieved your task for the day.

Give yourself a break

Procrastination is old as the world, and you shouldn’t beat yourself down for not being as efficient as you’d want to be. Sure, you shouldn’t go too easy on yourself because that might also further the problem. The addictive behavior is not impossible to beat but must come from a breakthrough within. Have gentle self-talks with yourself. Understand your root problems and devise small plans to improve daily.

Tobias Foster is a journalist, writer, and chief editor with more than five years’ work experience and big ambitions. He works at a dissertation help service and specializes in college paper help and counseling.