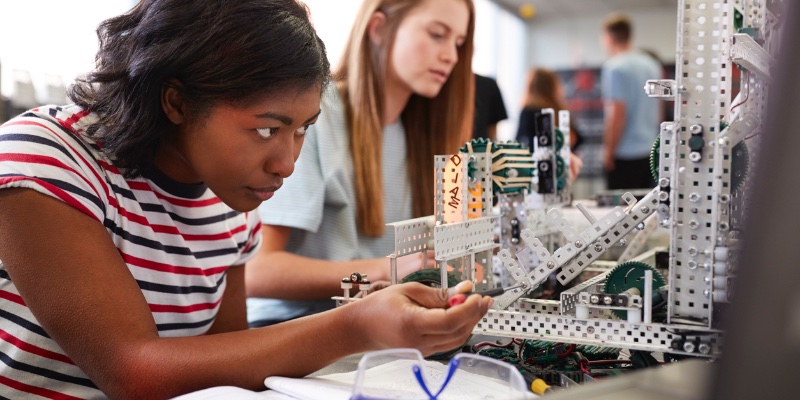 From my own experience I can tell you that one of the questions that people with liberal arts degrees get asked the most is probably, “What will you do with your degree?”

This doesn’t come from a bad place; we are in a tech-driven economy. According to Forbes and Glassdoor, computer science is the highest paying major five years out of college, along with electrical, mechanical, and chemical engineering.

However, this doesn’t mean that it’s as simple as “tech is the future and liberal arts are not.” Trying to think of both as completely unrelated may support the dangerous belief that technology can be separated from its human context.

Harvard Business Review challenges this dichotomy as well by talking about Cents and Sensibility: What Economics Can Learn from the Humanities, a book by Northwestern University professors Gary Saul Morson and Morton Schapiro. HBRexplains that in this book, “They argue that when economic models fall short, they do so for want of human understanding . . . People don’t exist in a vacuum, and treating them as if they do is both reductive and potentially harmful.”

This is where the liberal arts education can come in. But first, what does it entail?

According to TopUniversities.com, a liberal arts degree program would include classes in the following areas:

But more than just the curriculum, a liberal arts education would prioritize a relationship between students and faculty with small class sizes, as well as qualities that would help personal growth such as ethical decision making, critical thinking, and better oral and written communication skills. In the long run, these are all skills that will benefit students when they enter the workplace, so why shouldn’t fields such as computer science intertwine with liberal arts?

Dalena Le, a recent graduate from Seattle University exemplifies this way of thinking. “I thought it was good for me to get a STEM degree from a liberal arts college,” she says. “Outside of my programming classes, I was required to take university core classes. They’re basically samplings of other disciplines: literature, social science, religion, ethics, philosophy. I was pretty well rounded by the time I graduated and what thrilled me most and scared me most was that the questions I was asked about myself, and the aspects of human nature and society I had to analyze in those classes ultimately came back to me in my computer science classes.”

Befittingly, the American Association of Colleges and Universities conducted a survey that found that, regarding liberal education outcomes, 81% of employers wanted more emphasis on critical thinking and analytic reasoning, and 89% wanted more emphasis on written and oral communications. Regardless of the major, these “soft skills” are what is gradually becoming more appealing for employers.

When asked about one of the biggest lessons she learned during her time as a student, Dalena mentions a class she took with a researcher from Microsoft:

“I remember her telling us once, with great emphasis: ‘The old school thought of engineering is: you come up with a brilliant product, you bang it out and make millions of dollars. Yeah, that doesn’t work anymore. It’s not enough. You must care about your customers. You are making these products for people. You guys as the new generation of engineers are going to come into those companies and you’re going to meet engineers like that, and they’re going to tell you that’s how things should be done and they’re WRONG.’ In other words, I may have somewhat dodged writing boatloads of essays and reading hundreds of pages between classes, but I wouldn’t be avoiding the human component of my work. . . I, as an engineer, will inevitably be faced with the task of creating a product that both satisfies my employers and my clientele, I must follow specifications but I must also think about the person who is going to be using my product and that requires far more than pushing keys. Luckily enough, my liberal arts education has equipped me with those sensibilities.”

A 2018 report titled “Robot-Ready” by Strada Institute for the Future of Work and Emsi delves deeper into the topic. One of its key insights, similarly to what Dalena expressed, was that human skills, such as leadership, communications, and problem solving are applied differently across different fields. This report believes that it’s not about choosing between STEM or liberal arts; it’s both. These researchers specifically, believe that the most valuable workers are those who are able to combine these different sets of skills.

STEM and liberal arts may seem like two drastically different fields of study, but as you can see, they can be far more intertwined than you would have thought. And, even if you choose not to combine your liberal arts degree with a technical one, the perception that a liberal arts degree will leave you jobless is simply wrong. The skills learned through a liberal arts education are transferrable to various fields. This degree could be well suited for technology, marketing, even business operations.

Howard Schultz, the CEO of Starbucks got a B.S. in Communications from Northern Michigan University. Andrea Jung, Former Avon CEO studied English Literature at Princeton University. Michael Eisner, Former Walt Disney Company CEO studied English Literature and Theatre at Denison University. Susan Wojcicki, YouTube’s CEO got her B.A. in History and Literature at Harvard. If you really think about it, what you study is not going to define what you do for the rest of your life, so really it’s about what you have learn and how you decide to use it.

Wendy studied Creative Writing and Theatre at Seattle University. She's happy to share some of her stories and help other international students adapt to life in the U.S.