Study-Abroad App Has the Right ‘Sauce’

Growing up in China, Jun Jiang enjoyed helping “figure things out” and knew at an early age he wanted to develop technology.

This love for problem-solving led Jiang, now a business student at San Diego State University in California, to develop an app that has helped more than 100,000 Chinese students better maneuver the challenges of studying and living in the United States, far removed from the comfort of their homes and families.

With a debut on the iTunes App Store coming soon, the app aims to help Chinese students succeed and enhance community connections in their respective cities. In its current form, it focuses on three major West Coast locations for Chinese students: San Diego, Irvine and San Francisco.

Jiang moved to the U.S. to attend San Diego State University’s American Language Institute (ALI) and the College of Arts and Letters, where he could continue learning about the world.

At the ALI, a division of the College of Extended Studies, Jiang said he could see Chinese students, like himself, struggling with practical aspects of living in San Diego due to the language barrier and cultural differences.

This provided the inspiration for his app, introduced on the Chinese social media platform, WeChat. There, its name translates roughly to “The Sauce for Abroad – the Overseas Chinese Students’ Community Builder.” Jiang said he used “sauce” in the sense of adding something to make food stand out and taste better, just as his app makes navigating life in the U.S. better for users.

He has since renamed it "Easy-A” for its introduction on the App Store, to follow its current pre-testing stage.

Beyond a sense of belonging, Jiang’s app is a source for sharing professor reviews, finding local housing, and offering dining options and discounts at local businesses.

After transferring to San Diego State University as an International Business major, Jiang was able to develop his tech business plan more fully. He found two partners, including a friend he met at ALI. He also acquired seed money from angel investors in order to develop his technology.

Jiang currently has a tech team of eight based in China and continues to add more capabilities to his app. With 100,000 users now, his three-year goal is to add more student users across the U.S., United Kingdom, Australia and Latin America.

Building community via technology fulfills Jiang’s lifelong dream of helping others be their best.

“I’m dreaming my life to help as many people as I can,” Jiang said.

When he graduates in 2019, he plans to continue app development and has ideas for 15 additional projects – building community connections with every endeavor. How Do I Get an Architecture Degree in the USA? Study-Abroad App Has the Right ‘Sauce’ 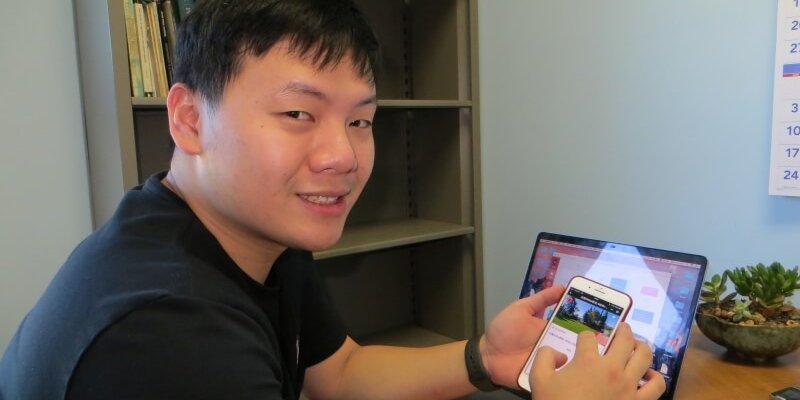